Student teams from the J. Irwin Miller Architecture Program took their ideas to the streets — or perhaps more accurately the alleys — of Columbus in a design competition.

The project, dubbed “Urban Switch,” required students to propose a public art installation for an alleyway or alleyways along the main commercial downtown corridor in Columbus — Washington Street — working in teams of two or three.

The project is a collaboration between the architecture program and the Columbus Area Arts Council, according to organizers.

Each group was tasked with coming up with a unique idea for the project, according to Jei Jeeyea Kim, assistant professor of the J. Irwin Miller Architecture program, which is housed in The Republic building downtown.

The chosen proposal will be granted a total budget of $10,000 — split between the arts council and the architecture program — and will be built in the summer, Kim said.

The proposals each had a view of how to transform a downtown alley into a visual showcase based on a unique theme, which varied widely among the four possibilities.

One team chose an “Arcade Alley” theme, with the designers saying that while alleys are traditionally thought of as a service space, they could be a place for visitors to explore. The designers were Ariel Walden, Jacquelyn Brice and Casey Adams.

The team said they would transform Alley C, described as a “long, tall and dark passageway” between Third and Fourth streets located to the east across Washington Street from The Commons, into a more inviting and safer space by adding illumination through a specialized design.

The alley has the potential to connect Washington Street to the Fourth Street Bar, Escape 812 and the Columbus Philharmonic, the team said.

Using nearby Brown County and its lush tree canopy as inspiration, the designers proposed an urban canopy for the alley that resembles an arcade, providing different visual experiences in the day and night. During the day, colorful tree trunks would be placed at regular intervals injecting natural beauty through abstract art, the designers said. At night, the blacklights on the trees would glow in neon colors, adding light but also an otherworldly feel to the space, which could attract visitors downtown to experience the nightlife, the designers said.

A second nominee was Alley Bazaare, whose designers complimented Columbus as “well-planned,” but noted the city is perhaps too “well-planned.”

Members of the team were Jacob Bower-Bir, Tony Meyer and Danny Weddle.

This team said the city needs “liminal spaces” — spaces that can accommodate anything as easily and as often as they accommodate nothing.

Noting the alleyway between Third and Fourth streets empties directly into The Commons, the team imagined a bazaar-like passageway that could be repurposed in different ways with tables and other structures designed to be functional for a variety of uses. The space would be made over each day depending on how visitors decided to use it, with space that can be partitioned off for different activities. The tables would fold up to the wall out of the space, or fold out for use.

Team members Morgan Anderson and Patrick Dimond presented “Movement” based on the energy that a wind tunnel can produce between two tall buildings.

The team chose the alleyway between Fifth and Sixth streets due to the buildings’ height. “Guided by the practice of drying laundry between buildings in other cultures, the team proposed installing mylar across the top of the alley “to swim in the alley’s gentle breeze and reflect daylight.”

The fourth presentation, “Relationships of Columbus,” was by Victoria Bell and Melanie Brock, who chose an alley between Fourth and Fifth Street.

The designers said the art installation would build upon the contextual and personal relationships observed in downtown Columbus, extending the city’s already colorful geometric vernacular to create murals inspired by the city’s significant art pieces and locations.

Those who visit may interact with the modular murals by physically moving the pieces to a different spot, to create a new image, the designers said.

“This inspires the people of Columbus to utilize their creativity to constantly be creating new, different murals and connect to an otherwise unused space in the downtown area,” the designers said.

Among the mural compositions suggested were designs based on the front of kidscommons, the Chaos sculpture in The Commons, the streetscape of Fourth Street, Friendship Way and Flamenco, the red sculpture on Washington Street.

In addition to the murals, the designers took the idea of lighted shapes for night wayfinding from the shapes along Friendship Way, another alley downtown.

Community judging panelist Armstrong is a veteran of her own public art projects in Indianapolis and nationally. She met with the IU students a couple weeks ago for a preliminary critique — and for some practical feedback “and ideas on how they can frame out their projects in real time,” as she put it.

“So much of public artwork is getting the design concept down, but also the feasibility of a project and answering the question of how you can actualize it in real time,” Armstrong said. “You look at ‘Do the materials work? Can it withstand the weather? And what about the budget? And how do you build in the artist and design fees?’”

Columbus native and judging panelist Hawkins, a former president of the Columbus Area Arts Council, said she was impressed by all of the presentations.

“Participating made me remember the early days, several years ago, when Kelly Wilson arrived in Columbus and began IUCAD with the goal of one day making Columbus home to a masters of architecture program,” Hawkins said. “It was great to see that work come full circle and to see students interacting with community members to solve real design problems in Columbus. Having these students in our community is a wonderful asset.”

Location: 333 Second St., Columbus. Program’s building is the former home of The Republic, which the newspaper occupied from 1971 through December 2016. The all-glass building was designed by renowned American architect Myron Goldsmith, of the Chicago-based firm Skidmore, Owings &amp; Merrill. The building was designated a National Historic Landmark in 2012. 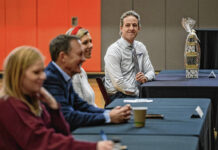