From the moment Indianapolis native Karen Batten agreed to marry Mike Pence in 1984, she knew she had signed up for a life in politics. But life as first lady of the state of Indiana was a bit more unexpected.

The pair met just a block from the governor’s mansion when Karen was playing guitar at a Mass at St. Thomas Aquinas Church. Mike was in law school at the time, and Karen said he was clear from the start that holding political office was important to him.

“Running for Congress was definitely a dream of his,” said Karen, and one she fully supported. After a couple of unsuccessful attempts at the position in the late 1980s and early 1990s, Pence was elected to Congress in 2000.

But when it came time for him to throw his hat in the ring for the governor’s race, the answer didn’t come quite as easily.

“That part was much slower to come into the picture,” said Karen, remembering a conversation during the holidays last year with their children, Michael, now 21, Charlotte, 19, and Audrey, 18. “We made the decision as a family.”

‘We’ is a word that comes up often when discussing Mike’s political career. Karen said that she has always had a voice when it was time to make a decision about his pursuing political office and that the kids have chimed in as they grew older.

“We’ve always approached it that way,” said Karen. “It would be difficult to do this separately.”

After a whirlwind year of campaigning around the state resulted in Mike being elected governor in November, Karen said that the family is slowly beginning to adjust to a new normal.

Part of that normal is now ever-present security and an increasing loss of privacy. Karen said that while Mike is still the one in the spotlight, since the election, she is recognized in public more often.

“There’s a little bit of anonymity that is just about gone,” she said.

The loss of that anonymity necessitates increased security, and Karen admits that having bodyguards, who escorted the family through Election Day and haven’t let up since, is taking some getting used to.

But for her, the good of political life far outweighs the bad. While many people might have become exhausted after days on the campaign trail, Karen said she loved being on the road and drew inspiration from the many people she met who were so devoted to their communities.

“I am always amazed by the people who want to give their time, talent and treasure to make Indiana better,” she said. “We always feel invigorated when we come off the trail.”

Karen said she is looking forward to serving as an ambassador, welcoming people to Indiana, and spotlighting some of the things the Hoosier state has to offer, such as the schools.

“Mike likes to say that Indy is about to take off,” said Karen. “And I am really excited to watch that.”

One aspect of life in the governor’s mansion that hasn’t yet come fully into focus is exactly what causes she will choose to champion in her role as first lady.

“I haven’t really decided what I am going to do as first lady,” she said. “But I know that it will have to do with kids.”

For Karen, who minored in art while studying education at Butler University, art therapy has long been a cause she supports and one likely to continue once she assumes her new role.

She is the honorary chairwoman of the art therapy initiative at Riley Hospital for Children and sits on the board of directors at Tracy’s Kids in Washington, D.C., a pediatric art therapy program for children with cancer.

“I am excited about having a platform to encourage those children,” she said.

Karen said that from the moment it became clear that her husband would become the 50th governor of Indiana, other gubernatorial spouses have stepped forward to offer their advice and support.

“The advice I keep hearing from other women who have been in my position is ‘just be yourself,'” she said. “And that’s very comforting.”

After spending the last 12 years balancing her roles of art teacher, mother and supportive spouse, Karen said she is thankful to be back in her home state. With her children mostly out of the house — youngest daughter Audrey will go off to college this fall — she is looking forward to starting this new phase of her life.

“It’ll be fun to be empty-nesters on this new adventure,” she said. 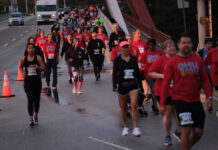 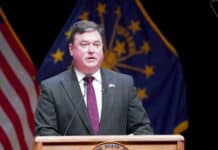 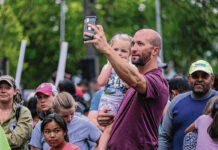