As we’ve moved into a new year, time is on our minds. At this time of year we tend to ponder the different dimensions of time: the past, present and future.

A world of total “novelty” (the new) would be confusing. A world of all things “old” would be deathly boring. We are stuck with trying to put these things together in the present, because the present is all we have. But it isn’t all we have to work with. We have the past and the future to work with as well.

God does not discount nor does God disown the past. The past is still important. God created it, after all! The new needs the old and the old needs the new. The old without the new would be boring; the new without the old would be confusing.

Just imagine waking up and finding your whole world was completely new! New place, new people, new name, new job. How much of that could you take? Not much.

I remember a science fiction story where a man woke up and discovered he had a different name. He then discovered his wife was not the wife he had known all along. He went to work and found that everybody at work knew him by a different name and, although they looked the same, none of them had the names or the roles at work that he had always known. That would be a world of total novelty. That would make you a stranger to others and a stranger to yourself.

On the other hand, staying stuck in the ever-repeating past would bore you to tears, if not to death. The movie “Groundhog Day” is a case in point. The main character, played by Bill Murray, keeps repeating the same day over and over and over again, until it drives him close to insanity. We sometimes imagine we would love to just “stop the hands of time,” but staying stuck in the past would be a nightmare.

The new needs the old and the old needs the new. In Luke’s Gospel, Jesus brings something new, and yet he and his family are very observant of the Old Testament Law. His parents have him circumcised; they dedicate him at the temple and he attends the synagogue faithfully. Jesus is critical of the religious institution, but he sees a proper place for religious institutions.

New and life-giving things emerge from the old.

In the book of Genesis, the sons of Isaac seek the old man’s blessing before they move into the future. Today, it would be wise for us to seek the blessing of the past even as we move beyond it into the future.

In Matthew 13:52, Jesus indicates his desire that we use the old in ways that encourage the emergence of the new.

Every teacher of the law who has been instructed about the kingdom of heaven is like the owner of a house who brings out of his storeroom new treasures as well as old.

So, before you relinquish the past or ask others to do so, celebrate it and mine it for the gold that is always buried there.

The Rev. Larry Isbell is pastor of First Lutheran Church in Columbus. He can reached at [email protected]. 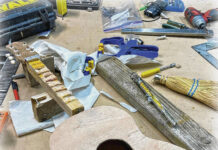