By The Seymour Tribune

That’s just one of several new details about the incident released during a news conference Friday morning at the station at 605 Meadowbrook Drive on the city’s east side.

“This baby is healthy, perfect and doing very well and appeared to be around one hour old,” said Monica Kelsey who is the founder and chief executive officer of Safe Haven Baby Boxes. That organization places baby boxes at fire stations and hospitals, where the mothers are guaranteed anonymity to surrender their newborns safely with no questions asked.

Kelsey said the infant was placed in the custody of Indiana Child Protective Services, who will find a set of adoptive parents for her within the next 45 days.

“Thursday at approximately 1:30 p.m. a parent utilized their right under the Indiana Safe Haven Law and surrendered their newborn baby girl in the Seymour Fire Department’s baby box,” Kelsey said. “This is the fifth time a box has been used in the state of Indiana in the last 24 months and the third baby to be surrendered in a baby box in Indiana in the last 134 days.”

She said after the person placed the baby in the electronically monitored box, a series of alarms were set off and a Seymour fire department member retrieved the baby within 60 seconds.

“This is a really good day for the residents of Seymour, Indiana,” Kelsey said. “This is the only organization in the country today that is saving babies under the safety of the law.”

Kelsey praised the actions of the baby’s mother or father, who surrendered their newborn in a safe place.

She said all too often we hear stories of babies being left in trash cans and dumpsters, but these parents chose to leave their baby safely and legally in this safe haven baby box.

“Last October, a baby was found alive in a plastic bag, about a mile from this fire station,” Kelsey said. “Since then, all literature and information about the baby boxes has been translated into Spanish for our Spanish speaking friends.

“We want to make sure everyone knows the baby boxes are available 24 hours a day, seven days a week, in case a mother in crisis needs to use it.”

Not in Seymour, but the last baby that was surrendered had a two-page note with it, stating the mother didn’t know what to do or how she could care for her baby so there’s no doubt that mother loved her child, Kelsey said.

“One of the most selfless things a mother can do is give up her child when she knows she wants what’s best for this baby, but knows it isn’t her,” Kelsey said. “We make every resource available to any of those moms that come to us.”

Kelsey said parents who surrender their babies have 30 days to come back if they change their minds.

Although it’s not the norm, she said they are working with three moms who have asked for open adoptions for their babies, so they wouldn’t be cut out of their babies lives completely.

“We have to continue to utilize the media on occasions like this because not everyone knows about the boxes,” Kelsey said. “The mothers want to know their babies are healthy and being taking care of, and getting the word out can save lives.”

Firefighter Craig Flinn, who is assigned to Station 3 but was off Thursday, said he found out about it through a text message from his son, Mitchell Flinn, who is a new fireman at Station 1 (headquarters).

“The guys that were here (Station 3) at the time called headquarters and got the chief and the guys were pretty shocked,” Craig Flinn said. “The guy who got to the baby first was in the room and there is a curtain that covers the baby box so identities will remain anonymous.”

Flinn said when the door of the baby box shuts, its magnetic doors are locked from the outside. When that door closes, it makes a thump.

“The guy that was in the room heard the thump and immediately told the guys in the kitchen there was a baby in the box,” Flinn said. “The three of them went together and got the baby and we were surprised this happened during the day time.”

Flinn said there was a damp blanket wrapped around the baby, but the baby was dry and the guys here grabbed a warm blanket out of the dryer to wrap the baby up and by that time the ambulance had arrived.

“The system worked perfectly and we had firefighters in the building, and the ambulance was on scene within minutes,” Fire Chief Brad Lucas said. “The baby was transferred to the hospital (Schneck Medical Center in Seymour) and is doing great and we’re really proud to have this resource available for the residents of Seymour.”

Lucas said the firefighters have had pediatric training and then Kelsey came down and gave them training information before the box was operational. They also have weekly alarm tests to make sure everything is ruining smoothly.

The baby box in Seymour was made possible by 2019 Columbus North High School graduate Hunter Wart, who raised $10,000 for his senior project to install one at an Indiana fire station last year.

“Many of you may remember that this baby box came about from the hard work of one senior, Hunter Wart,” Kelsey said when introducing him. “He collected cans and mowed grass to pay for this baby box.”

Hunter said he was glad his hard work had paid off.

“I’m glad that the mother brought her baby safely to the baby box, and I want my hard work to pay off for a long time,” Hunter said. “This is the first baby to have been surrendered to this box and she will be now be known as Baby Mia.”

Hunter said Kelsey is normally the one who names the surrendered babies, but since this is the box he worked for and donated, he was given the chance to name her. 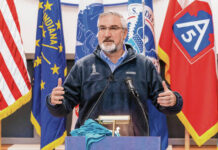 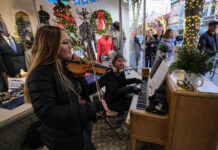