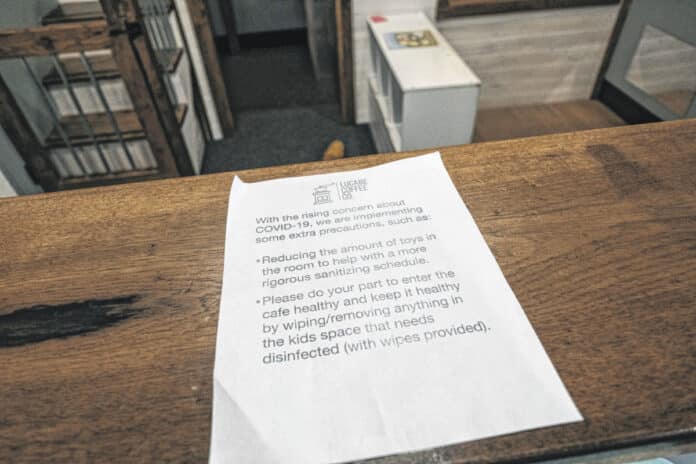 Sitting at a pub table adjacent to the tinted windows of his downtown business Monday, Kurt Schwarze clenches a cup of coffee in his right hand and his smart phone in the left at 12:30 p.m.

The streets of Columbus are empty during the lunch hour as an impending press conference announcement will shut down businesses in a matter of minutes.

While he converses with his guests at 4th Street Bar & Grill, which are separated by a minimum booth’s length each for sanitary purposes, Schwarze is interrupted by a ring every few minutes.

While each buzz is different, they all beg answers to the same question: What do we do now?

The Schwarzes, who also own Fresh Take Kitchen downtown, were like many — if not all —  restaurant owners Monday morning who received the news that dining-in in Columbus was to be restricted starting Monday afternoon.

The third bullet point in the news release drew the most attention.

“Bars, nightclubs and restaurants are required to close to in-person patrons and may provide take-out and delivery services through the end of March,” Holcomb ordered.

A few hours earlier, Columbus Mayor Jim Lienhoop, joined by Bartholomew County Commissioner Carl Lienhoop and other local officials in a telephone press conference, urged restaurants and other businesses to promote take-out, drive-thru or delivery options; churches to reconsider any meetings; and all members of the community follow new guidelines from the federal Centers for Disease Control that recommend cancelling or postponing in-person events that consist of 50 people for the next eight weeks.

Later in the day, President Donald Trump recommended that number no more than 10 people in a gathering.

Many businesses responded before Holcomb’s announcement was officially made, putting notices on entrances saying doors were closed.

While the announcement wasn’t a total surprise to the Schwarzes, as they had a feeling that it was coming toward the end of last week, it didn’t soften what serves as another blow to local businesses due to the pandemic.

The biggest concern for the Schwarzes are their 23 full-time staff members, which rely on the businesses for income.