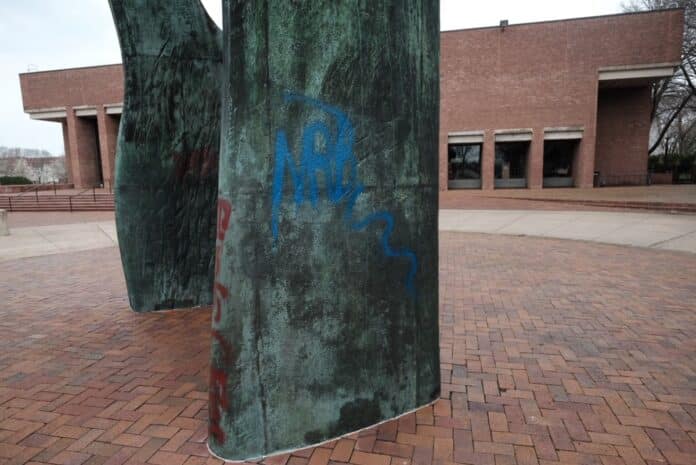 With the assistance of several tips from the public, the suspects in this morning’s string of thefts and extensive vandalism have been identified and two 16-year-old juveniles from Columbus were taken into custody on Saturday afternoon, said Lt. Matt Harris, Columbus Police Department spokesman. Officers are searching for a third juvenile suspect at this time.

The juveniles were transported to the Bartholomew County Youth Services Center.  In total, CPD received over 50 reports of thefts from vehicles and vandalism to property that occurred primarily downtown and on the city’s northwest side.  This investigation is ongoing.

CPD detectives are encouraging anyone who was a victim of theft or vandalism overnight to report the incident by calling 812-376-2600.

6 p.m. update: Columbus police have one juvenile in custody in regards to the vandalism in Columbus, a 16-year-old from Columbus, said Lt. Matt Harris, police spokesman.

Harris said further information on a second suspect may be released shortly and the department is continuing to look for a third individual believed to be involved in the incident. All three are juveniles, Harris said.

The police department also expressed its gratitude to the public, with Harris saying officers received “tons of calls,” messages and other help in identifying the suspects.

For more on this story, check back here or pick up a Sunday Republic.

Columbus Mayor Jim Lienhoop released the following statement in response to the vandalism:

“Overnight, vandals spray-painted racist, homophobic, and COVID-related graffiti throughout the City, damaging local businesses, residents’ property, churches, schools, and works of art.  These actions shock the conscience during normal times but amid the COVID-19 public health crisis, it is even more disturbing.

Our law enforcement are working with area residents and affected businesses and organizations to gather any information that will lead to the identification of the perpetrator(s).  We have worked quickly to mobilize efforts to remove or cover graffiti in public locations.  I want to assure the public that at this time we are unaware of any physical threats against residents, students or business owners.

Incidents like these have become all too common in today’s society.  We are truly saddened by these events.  But, let me be clear when I say that hate in any form is neither accepted, wanted nor tolerated in Columbus, Indiana.  This unacceptable turn of events is further evidence of our need to unite as a community.  We are all in this together.  If this behavior does nothing more, I hope it encourages honest and frank dialogue about the need for our community to set aside differences and come together as neighbors because it’s the right thing to do.”

Columbus police are looking for individuals who caused extensive vandalism with spray paint in the downtown Columbus area and also in an area north of 25th Street in the 2500 to 2700 block of Pearl Street and nearby Lafayette Avenue.

Columbus police spokesman Matt Harris said nearly every officer on duty is documenting the damage this morning, which included paint on the Large Arch in front of the Bartholomew County Library, and on churches, funeral homes, schools and homes. An estimated 50 acts of vandalism have been documented so far.

The spray paint includes racist and homophobic graffiti, profanity and references to COVID-19, among other messages.

Harris said the damage is believed to have occurred overnight, Friday into Saturday, and whoever did this also broke into vehicles in addition to spray painting them.

“The damage to some of the pieces of art — this is just sickening,” Harris said.

Officers are advising homeowners and other victims to document the damage with a photo and then remove it as quickly as possible as some of the paint they are finding is not fully dry and will wipe off.

Columbus police are asking local residents to call them if they have footage from security cameras for doorbell cameras which police can use to identify who did this, Harris said.

Residents should call (812) 376-2600 if they can provide tips on the identity of whoever did this or camera footage. Tips may be left anonymously.

STATEMENT FROM THE COLUMBUS POLICE DEPARTMENT:

The Columbus Police Department is currently investigating over 50 separate acts of vandalism and thefts from vehicles that occurred in the city overnight.  These incidents occurred both downtown and on the city’s northwest side including the 2500-2700 blocks of Lafayette Ave. and Pearl Street.

A number of businesses were spray painted with vulgar graffiti including a funeral home, a church, and a school.

The historic Large Arch sculpture in front of the Bartholomew County Library, which has been a part of the community for nearly 50 years, was also vandalized with spray paint.

Anyone with information in regards to the acts of thefts and vandalism is urged to contact the Columbus Police Department at 812-376-2600.  Tips and information can be left anonymously.

Home and businesses owners are urged to check their security and doorbell cameras to see if they have video footage that they can share with law enforcement that can help identify the suspects.

For more information on this story, see Sunday’s Republic.