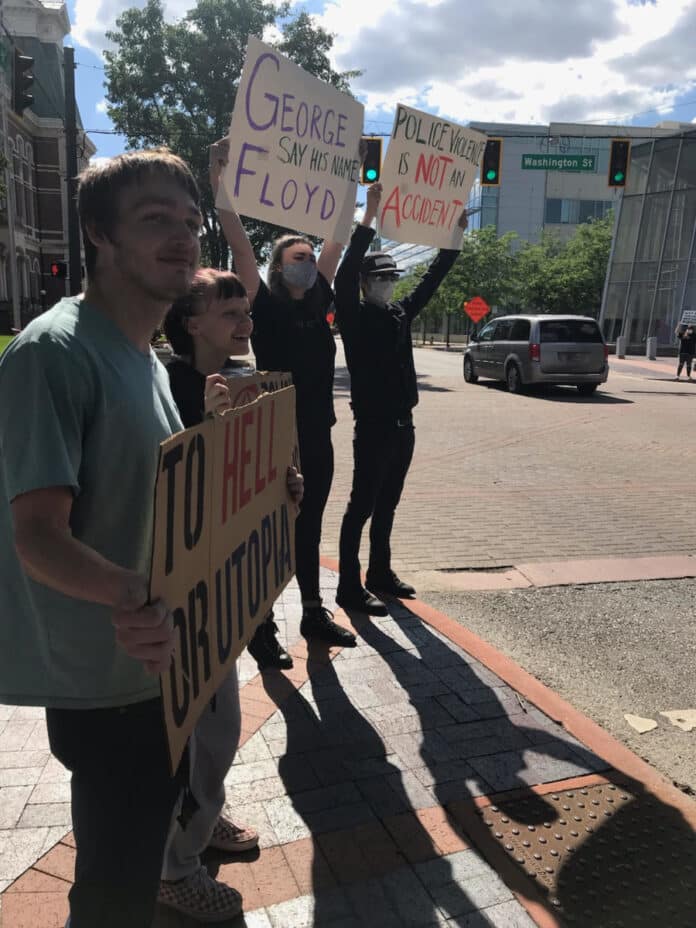 COLUMBUS, Ind. — A group of protestors spent Saturday afternoon asked local residents to remember the killing of George Floyd in Minneapolis, gathering at Third and Washington Streets encouraging motorists to honk in solidarity against racism and police brutality.

The group, organized through a Facebook post, stood with signs on each corner at the intersection where The Commons is located, most holding signs asking passersby to remember Floyd, Black Lives Matter, that “Police Violence is not an Accident” and asking people to say Floyd’s name.

Motorists responded by honking and yelling in support as they passed through the intersection Saturday. Carryout pizza was brought in as the protest continued through the day.

Danielle Gates, Columbus, said she decided to make her voice heard because “people should speak out against injustice.”

Brandon Thompson, Columbus, said it was important to speak out about Floyd’s death because not many people are willing to.

Laquesha Williams, Columbus, said she knew what had happened in Indianapolis on Friday night into Saturday morning, and the protesters in Columbus did not condone the violence there.

Veda Bammidi, Columbus, said she had just moved to Columbus from New York and had been thinking about going to Indianapolis, but decided instead to join the group in downtown Columbus.

“Honestly, I’m very touched by this,” she said. “I wanted to do my part as well.”