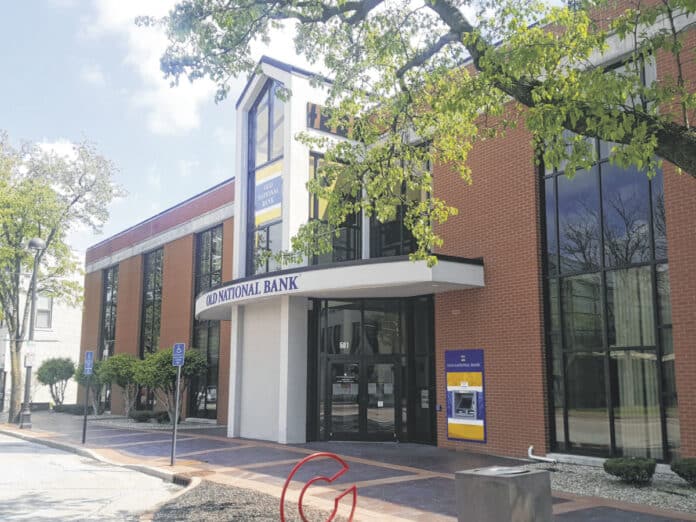 Centra Credit Union will purchase the former Old National Bank branch at 501 Washington St., establishing its first downtown location in the city where it was founded 80 years ago.

The new, full-service branch location will be the city’s largest among all banking companies at 28,140 square feet, spread over three stories — the main floor, second floor and a full basement.

Centra has agreed to purchase the building from Sprague Rentals LLC, owned by Rick and Janeen Sprague. The purchase price of $1,773,750 includes all furniture and finishes and a 20-space parking lot at the back of the property, with closing of the sale expected soon. The property was assessed by the county in April at $1,779,200.

When its 0.58-acre Washington Street branch office closed, Old National moved five loan officers to leased space at 445 Fifth St., home of the Coriden Glover law office. Old National’s closing of its Washington Street office, announced in January, was part of a consolidation plan which resulted in 10 Indiana offices among 26 nationally to be shuttered.

Old National had operated from the Washington Street location since Oct. 18, 2012, when it acquired it from Home Federal Savings Bank. Seymour-based Home Federal opened the new facility on April 23, 1960.

Old National and Sprague Rental both declined to provide the purchase price of their deal, and the paperwork for it had yet to be received Friday by real estate offices within Bartholomew County government. When that paperwork arrives, the Old National-Sprague purchase price will become public.

The Washington Street banking center does not have drive-thru service, although the original building blueprint called for one. Among five current Centra branch offices in Columbus, the closest one to Washington Street is at 601 Union St., less than a half mile away, and it has a drive-thru.

The other Centra branches in Columbus are at 2020 26th St.; 1430 N. National Road; 2165 W. Jonathan Moore Pike; and 2010 W. 450S, which is temporarily closed to the public due the coronavirus pandemic. The Walesboro branch still has teller-assisted service, however, in addition to call center employees who are based there for the time being as a result of the company’s social distancing efforts.

Since the coronavirus pandemic began disrupting business operations and everyday life, Centra has been strongly encouraging its members to use digital banking options, drive-thrus, and ITMs or ATMs, said Chrissy Bailey, vice president of marketing.

“But our branch lobbies are open, with limited capacity for social distancing,” Bailey said. “Once we had plastic protective shields installed at the teller lines, we began reopening lobbies to walk-in service.”

Centra is the second-largest financial services company with more than $605 million in deposits in Bartholomew County. Locally, it ranks behind only First Financial Bank, which had $676 million in deposits as of June 30, 2019, the most recent information available.

Centra was not an original bidder on the Washington Street facility early in the year, unaware then that the property was even for sale, said Rick Silvers, president and chief executive officer.

However, Sprague Rentals — which planned to finance its purchase through Centra — subsequently began having conversations with credit union executives about the Washington Street banking building, including lease arrangements. As those talks progressed, the two parties agreed to execute a purchase arrangement instead, Rick Sprague said.

“We did not buy it to sell it,” said Sprague, who with his wife and business partner Janeen initially considered using the Washington Street office as a new headquarters for their own Columbus businesses, now located at 420 Second St.

Centra had been looking for the right opportunity to establish a presence in the downtown business community — and 501 Washington St. ended up being it, Silvers said.

“Centra has always called Columbus home and we’re excited to be a part of the downtown Columbus community. The new building is in the heart of Columbus and within walking distance of many of our members and business members working or based downtown. This gives Centra the opportunity to better and more conveniently meet their needs for investing, borrowing, saving, mortgage and title services, and business lending and deposit needs,” Silvers said.

“It’s really a great thing for them,” said Rick Sprague, who called 501 Washington “the number-one corner in downtown Columbus.”

After the deal closes, Centra said it would assess any renovations or improvements needed before a planned opening in the fourth quarter of this year. At that time, members will have access to a full range of banking services downtown, including Interactive Teller Machines (ITMs), which allow members to access a live video teller for extended banking hours.

Centra will also assess its current facilities elsewhere in Columbus to determine whether any changes should be made affecting them, Silvers said.

Centra has been headquartered in Columbus since its founding as Cummins Employees Federal Credit Union in 1940, this year observing its 80th anniversary of serving the community.

The purchase announcement comes less than two months before the scheduled completion of Centra’s $18.5 million corporate headquarters office at 3801 Tupelo Drive on the city’s west side.

The new headquarters will have 55,000 square feet of space compared to 17,000 of usable space in the current building located on the same site. About 150 employees will work in the new headquarters — most of them having back-office functions such as marketing, human resources, information technology, loans and deposit operations and mortgage support.

Once the new headquarters is fully operational, Centra plans to raze its current headquarters building to create parking space.

Lienhoop called the Washington Street banking center purchase a positive development for the city and Centra.

“It’s good to see them in the heart of our downtown business district,” the mayor said.

Recent smaller expansions by Centra include launches of branch banks in Nashville and Salem, Indiana.

“We have something good that’s going on and I think people recognize that,” Silvers said.

“When a community supports you, you support it back,” he said. “It’s being a good corporate citizen.”

Headquarters: 3801 Tupelo Drive, Columbus. A new three-story headquarters office is expected to open in August during a phased-in transition. The 55,000-square-foot building will replace the current headquarters

History: Centra Credit Union was founded in 1940 by eight employees of Cummins Engine Co. It was originally known as Cummins Employees Federal Credit Union. The name was changed to Centra in 1995 to reflect the company’s growth and diversity.

By the numbers: Centra is the fifth-largest credit union in Indiana with 160,000 members, assets in excess of $1.6 billion and more than 375 team members.