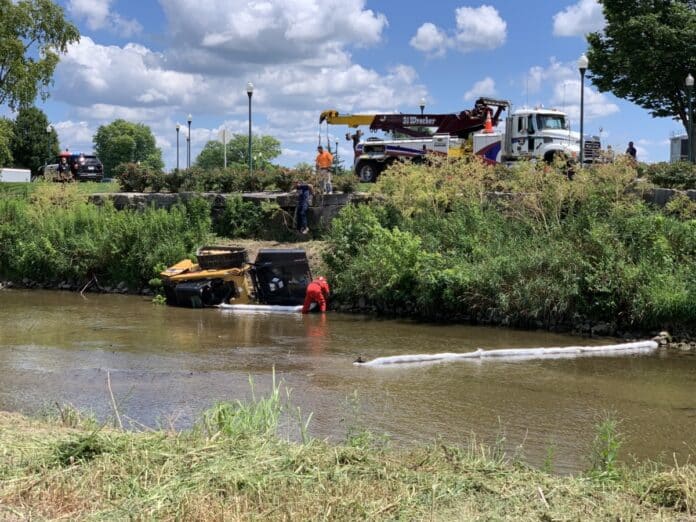 No injuries were reported after a skid steer mower being used to mow and clear the Haw Creek bank near Columbus Regional Hospital flipped on its side into the creek.

The Indiana Department of Natural Resources took over the investigation from Columbus firefighters and police, after it was reported to 9-1-1 at 12:50 p.m. Monday, investigators said.

Columbus police said the driver, an independent contractor who was not injured, was doing mowing and trimming work for the hospital on the creek bank when the mishap occurred.

Columbus Fire Department incident commander Capt. Dave Dwyer said the operator was mowing the east side creek bank when the earth gave way causing the skid steer mower to roll onto its side at the water’s edge. The operator was able to climb out of the cab, which was partially in the water.

Police said the operator was fortunate in that the water is very low in the creek right now, with police saying the water was only around a foot deep where the vehicle went in to the creek.

The hazardous materials team placed several large collection devices, called booms, to prevent any spilled fluids from moving down stream. A very small amount of diesel fuel and hydraulic fluid did enter the water, Dwyer said. Those materials were collected and removed by firefighters with the aid of the booms placed in the water.

The skid steer was removed from water by 31 Wrecker Service by using a large crane truck to lift the mower from the water.

Agencies that assisted at the scene include the Columbus Regional Hospital, Columbus Police Department, and 31 Wrecker Service.

The Indiana Department of Natural Resources is taking over as  lead investigator into an incident in which a independent contractor operating a mini-bulldozer flipped the vehicle into Haw Creek today.

Columbus police said the driver, who was not injured, was doing mowing and trimming work for the hospital when the mishap occurred. Police said the operator was fortunate in that the water is very low in the creek right now.

A wrecker is at the scene to remove the vehicle from the creek.

COLUMBUS, Ind. — Columbus police are at the scene of construction equipment that toppled into the creek near Columbus Regional Hospital.

A large wrecker is at the scene and a boom has been placed in the creek to prevent any sort of spill from what appears to be a bulldozer.