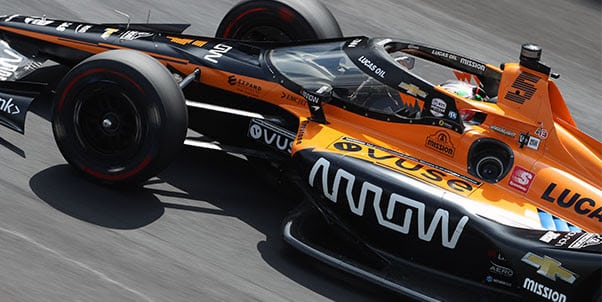 O’Ward, from Monterrey, Mexico, produced a top lap of 225.355 mph in the No. 5 Arrow McLaren SP Chevrolet during the two-hour final practice before Race Day this Sunday. O’Ward will start 15th when “The Greatest Spectacle in Racing” takes the green flag at 2:30 p.m., with live coverage starting at 1 p.m. on NBC and the Pennzoil INDYCAR Radio Network.

2008 Indy 500 winner and five-time NTT INDYCAR SERIES champion Scott Dixon was second fastest on the 2.5-mile oval Friday as teams worked on their race setups, with a best lap of 224.646 in the No. 9 PNC Bank Chip Ganassi Racing Honda. Dixon will start second Sunday.

Takuma Sato, winner of the 2017 Indy 500, ended up fourth at 224.580 in the No. 30 Panasonic/PeopleReady Honda. He will start third Sunday, on the front row with Dixon and pole sitter Marco Andretti.

Arrow McLaren SP placed two cars and rookie drivers in the top five, as Oliver Askew was fifth at 224.128 in the team’s No. 7 Chevrolet entry. Askew starts 21st in the 33-car field Sunday.

Pole sitter Andretti has been a fixture near the top of the speed charts in every session since practice opened Wednesday, Aug. 12, but he ended up 28th overall Friday at 221.314 in the No. 98 U.S. Concrete/Curb Honda.

For more Indy car coverage, pick up weekend editions of The Republic.