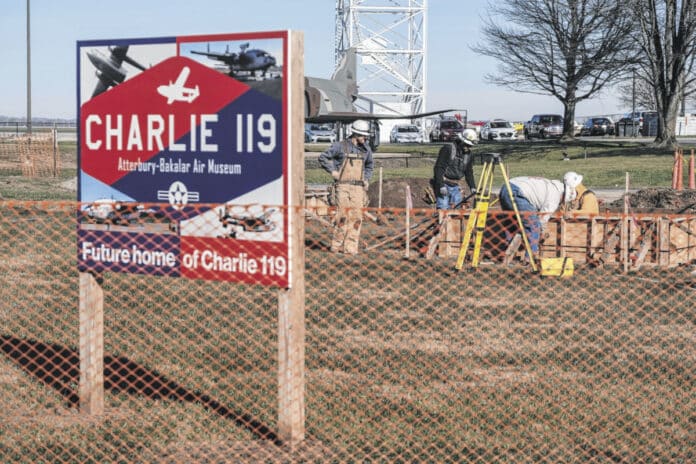 The 40,000-pound plane, which is not airworthy, was taken apart several months ago at an airport in Greybull, Wyoming, where the aircraft’s parts were loaded on to trucks and driven 1,460 miles to the Columbus Municipal Airport.

The final pieces of the aircraft arrived in July.

The plane is in a hangar at the airport, where volunteers have been painting the flight deck, installing flight deck windows and repairing sheet metal in preparation for moving the plane to its display site just south of the McDonnell Douglas F-4 Phantom II aircraft now on display near the museum, said Skip Taylor, a museum member who is co-leading the C-119 project.

Over the last couple of weeks, workers from Force Construction have started to build the display site, including constructing three concrete pads that will support the wheels of the 40,000-pound-plane and the base of the sidewalk that will allow people to walk around the airplane, among other tasks, said Pat Billey, a museum member who is co-leading the project with Taylor.

Renderings of the final display site posted on the museum’s Facebook page show the plane facing northwest and placed diagonally across the site, pointing directly toward the Atterbury Bakalar Air Museum, which is located at 4742 Ray Boll Blvd.

In addition, a sidewalk will loop around the aircraft and connect to an existing sidewalk that runs perpendicular to Ray Boll Boulevard.