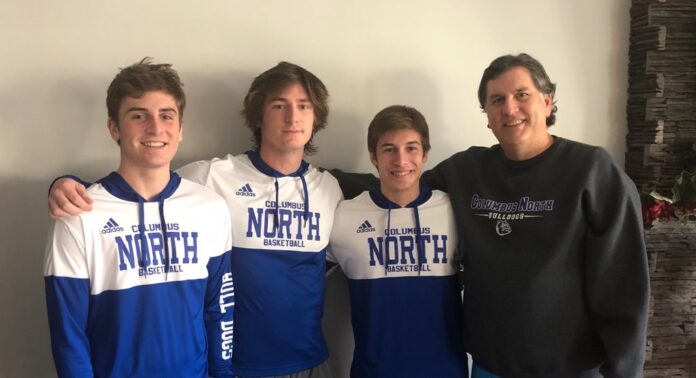 Mike Harmon had plenty of success in his 11 years as Brown County girls basketball coach, but after the 2012-13 season, he decided it was time to step away to watch his kids play.

These days, Harmon is back coaching — and he’s watching kids play at the same time. Mike is a varsity assistant at Columbus North, where his oldest son Reese is a senior point guard and junior Rhett and sophomore Luke play on the junior varsity.

“I enjoy it every day,” Mike said. “I am glad that I have the opportunity to be around them. I know that this is just a brief moment in time, and with Reese being in his last year, I watch the little things. It can be tough if one of the kids plays well and the other one doesn’t. But they all get along really well, and it’s a fun time coaching those guys.”

The kids enjoy being around each other, and their father, as well.

“It’s nice having them around,” Reese said. “I see my brothers in the hallways. Going against them in practice, it’s nice to be the Alpha.”

The 5-foot-8 Rhett and 5-10 Luke see going against the 5-11 Reese and the other varsity players in practice as a learning experience.

“It’s been really awesome just to go out and compete,” Rhett added. “It’s challenging to play against people that might be better than you and experience teachable moments.”

Mike joined the North program in 2017 when Reese was a freshman. He coached the JV the past three years before becoming a varsity assistant this season.

“Mike had a very strong coaching record when he came here to North,” North head coach Paul Ferguson said. “He was a very accomplished head coach in his own right, and we were very fortunate to get him on our staff. Mike also has invested a lot of time over the years in coaching just about every level of Revolution (travel) basketball you can imagine. He’s a fantastic coach and teacher of the game, and a lot of kids have benefited from his knowledge and expertise.”

That includes his three sons and daughter Kaylie, a sixth-grader at Richards Elementary who plays for the Columbus Comets travel program. Reese is the most accomplished so far, having been a varsity player since late in his freshman year and the starting point guard since the beginning of his sophomore season.

“Reese is a tremendous leader,” Ferguson said. “It’s very rewarding as a coach to have someone who is has that coach-on-the-floor mentality. Having a very high basketball IQ, Reese has become that guy for us.”

“Reese embodies the type of player we look for in our program who puts his teammates in front of himself,” Ferguson said. “He might have two or four points in a game, but he has seven assists and one turnover. He’s not very concerned about scoring. He just wants to make the right play.”

That applies to the defensive end of the floor, as well.

Rhett and Luke play on a JV team that also if off to a 4-1 start. Luke was a starter on North’s 21-0 freshman team last season.

“They’re guys who love basketball and work very hard on their game,” Ferguson said. “All three boys are just a big part of our culture because they’re incredibly high-character young men who love basketball and have a strong work ethic. They love to work on their game. The younger boys follow Reese’s lead because Reese is a really high-level two-sport athlete at North, and that’s a very hard thing to do.”

Mike described his sons as three different kinds of players.

“Reese is a ball-handler and a distributor and makes other kids around him better,” Mike said. “Rhett is a kid that will shoot the 3 really well, and Luke is a combo guard. He can handle the ball and shoot it.”

Reese’s best sport actually might be baseball. He threw a no-hitter as a sophomore and has committed to play baseball at Iowa Western.

Reese was hoping for a big junior season on the diamond, but spring sports were canceled because of COVID-19.

“It was a big disappointment,” Reese said. “I was pretty upset. It’s really eye-opening. With COVID happening, it can be taken away. We’ve really enjoyed the few (basketball) games that we’ve had, and hopefully, we can have baseball season, as well.”

For now, he’s focused on basketball and making this the best of his four seasons with the Bull Dogs.

Filling It Up: State scoring leader flourishing in larger role for Cougars