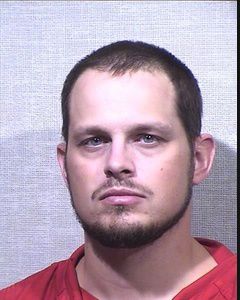 SEYMOUR — A 31-year-old Elizabethtown man who is accused of child molesting for having sex with a 13-year-old female has been arrested on three Level 1 felony counts, police report.

Jordan Trevor Sargent was booked into the Jackson County Jail in Brownstown at 2:16 p.m. Thursday on those charges after his arrest by Seymour police.

According to a news release from Lt. C.J. Foster, Sargent’s arrest is the result of an investigation that started May 5 when police received information that two males older than 21 had had sexual intercourse with the 13-year-old.

Investigators initially were able to determine only one of the males had intercourse with the girl and that incident had happened in Jennings County. That case was forwarded to the Jennings County Prosecutor’s Office for review, and no arrest has been made in that case, Foster said.

As police continued to examine evidence obtained while serving the original warrants and conducting follow-up interviews, they were able to determine the second man — Sargent — initially under investigation had sexual intercourse with the girl in Jackson County, Foster said.

After Sargent’s arrest Thursday, he was taken to the Seymour Police Department for questioning but declined to talk to police, Foster said.

Sargent was being held without bond pending his initial hearing in Jackson Circuit Court.

A Level 1 felony is punishable by 20 to 40 years in prison with an advisory sentence of 30 years.

‘This is how I’m going to die’: Local resident recalls near-fatal fentanyl overdose, journey to recovery