Rep. Greg Pence, R-Indiana, has voted against a short-term increase to the nation’s debt limit that ensures the federal government can continue paying its bills into December and temporarily avert an unprecedented federal default that experts warned would devastate the economy.

In a 219-206 vote along party lines, the House voted to increase the debt limit by $480 billion, according to congressional records. Every House Republican voted against the measure.

The increase in the country’s borrowing ceiling cleared the Senate last week on a party-line vote, The Associated Press reported. President Joe Biden is expected to sign the measure into law this week.

The debt limit is a nearly century-old artificial cap that Congress placed on the U.S. government’s ability to borrow, according to wire reports. Lawmakers have raised or suspended it nearly 80 times since 1960, including three times during the Trump administration.

Raising the debt limit does not authorize new spending but rather allows the federal government to pay its bills. Because the government spends more than it takes in through taxes and other revenue, it has to borrow money to pay its obligations.

Treasury Secretary Janet Yellen has warned that steps to stave off a default on the country’s debts would be exhausted by Monday, and from that point, the department would soon be unable to fully meet the government’s financial obligations, according to wire reports.

A default would have immense fallout on global financial markets built upon the bedrock safety of U.S. government debt, according to the AP. Routine government payments to Social Security beneficiaries, disabled veterans and active-duty military personnel would also be called into question.

In recent years, the borrowing limit has been the subject of deepening partisan standoffs, with lawmakers from both parties using debt ceiling votes as leverage for other priorities, according to wire reports.

Though Pence opposed the temporary hike in the debt limit on Tuesday, he was one of 65 House Republicans who voted to suspend the debt limit in 2019 when President Donald Trump was in the White House.

House Speaker Nancy Pelosi threatened to vote against raising the debt ceiling when Trump was in office, saying she had no intention of supporting lifting the debt ceiling to enable Republicans to give another tax break to the rich, according to wire reports.

Republicans in 2011 managed to coerce President Barack Obama into accepting about $2 trillion in deficit cuts as a condition for increasing the debt limit — though lawmakers later rolled back some of those cuts.

Congress will revisit the issue in December — a time when lawmakers will also be laboring to complete federal spending bills and avoid a damaging government shutdown, according to wire reports. 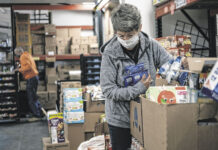