“I’m very proud of our kids’ efforts in this ballgame,” North coach Tim Bless said. “It was a little crazy because we knew the weather was coming, and we knew we wanted to get out fast in this football game, and that was exactly what we were able to do in all three phases. Offense, defense and special teams made contributions early…I wanted them to spend some time with their loved ones out there and enjoy this victory on Max Andress Field on senior night.”

With fall break this week for the Bull Dogs (6-3, 5-0), Bless said he was proud of his team’s focus in the week leading up to the game.

“It was a big mission of our coaching staff. It’s a unique where you’re out of school, it’s fall vacation, but I’m so proud of our kids,” Bless said. “We had great focus during the week in practice. Our attendance was excellent, our attitudes and our efforts, we came to play football.”

North will have a double-bye and will face the winner of the sectional semifinal contest between heavy state title favorite Class 6A No. 1 Center Grove and Franklin Central on Nov. 5. The Trojans also are ranked No. 9 in the USA Today national polls.

The Bull Dogs wasted no time getting on the scoreboard. They drove down the field all the way to the 33-yard line. North quarterback Luke Hammons dropped back and delivered a pass in the backfield to Dyllan Redmon, who ran all the way down the left sideline for the score to go ahead 7-0.

On the Braves opening possession, they bobbled the catch on the kickoff, and it put them deep in their own territory at the 4-yard line. The Bull Dogs were in good field position following the punt from the end zone to the 19-yard line. The North drive was then capped off with a 2-yard touchdown run from Redmon to expand the lead to 13-0 after the extra point was no good.

The defense of North stymied the Terre Haute South offense when it forced a fumble, and it was recovered by Bryant Trinkle to give the Bull Dogs excellent field position, but they were unable to convert it into points as there was a miscommunication on the snap, and it sailed way past the backfield and recovered at the 28-yard line. North eventually turned it over on downs, but the score remained 13-0 after one quarter.

In the second quarter, the Bull Dogs ballooned their lead even further when Hammons ran to the left side on the keeper for the 9-yard score, and then Jaxson Scruggs caught the pass from Hammons for the two-point conversion to make it 21-0 with 10:28 to go in the half.

North extended the lead with a Hammons pass to Damon Edwards for 15 yards to make it 29-0 after the successful two-point conversion with 8:57 left. After the Bull Dogs had good field position once again, Hammons ended the drive with a 1-yard keeper to make it 36-0 with 6:24 left.

Terre Haute South was threatening to score in the final two minutes of the half, but Scruggs made an interception in the end zone with 51.3 seconds left to keep the score 36-0 in North’s favor. A running clock was issued in the second half, and neither team scored. 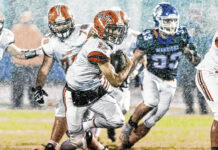 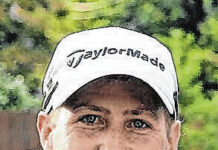