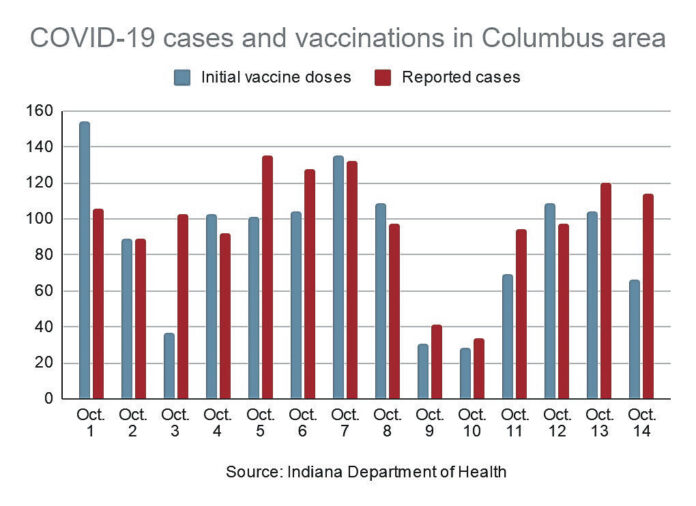 COVID-19 continued to claim lives in the Columbus area during the first half of October, while vaccination rates struggled to keep pace with new infections.

Ten people in the Columbus area — which includes Bartholomew, Brown, Decatur, Jackson, Jennings and Shelby counties — died from COVID-19 during roughly the first half of October, according to the Indiana Department of Health.

At the same time, 1,382 positive COVID-19 tests were reported in the area during the first half of the month, compared to 1,239 initial doses of vaccines given out over the same period, including the single-shot Johnson & Johnson vaccine.

A total of 3,667 people in the area have received their booster shot so far this month — three times the number of people opting to start the vaccination process.

Overall, 72 people in the area have died from COVID-19 since Aug. 1 even though effective vaccines have been widely available for months.

Local health officials have described the increase in deaths and the decrease in vaccinations over the few several months as “heartbreaking” and “frustrating.”

Officials at Columbus Regional Health have said that the vast majority of hospitalizations and deaths from the virus over the past couple months were preventable if people had just chosen to get vaccinated.

In September, CRH officials said that about three in four people hospitalized with COVID-19 over the previous month were unvaccinated. Earlier this month, CRH said 19 of the 22 people who had died from COVID-19 at the hospital since July were unvaccinated.

But as local officials plea with people to get vaccinated, hospital officials are continuing to contend with dozens of COVID-19 hospitalizations.

There were 40 people hospitalized at CRH with COVID-19 on Wednesday — including one child — marking the 57th consecutive day that at least 28 people were hospitalized locally with the coronavirus, according to hospital records.

By comparison, the hospital went 68 straight days with at least 28 people hospitalized during the winter surge, peaking at 59 on Dec. 2. So far, the peak of the current surge has been 44, which was reached four times last month.

COVID-19 hospitalizations in Indiana have declined over the past month from 2,687 to just under 1,600 earlier this week.

However, CRH has yet to experience a similar decline, with hospitalizations largely remaining between 30 and 40 over the same time period.