ST. LEON — Columbus East made it back-to-back wins over ranked opponents, pulling out a 55-46 victory Thursday at East Central.

“We didn’t play our best the first half, and we were only down one,” East coach Danny Brown said. “The first quarter, we were a little loose with the ball a couple of times, and they had a big first quarter. Then, our defense shut them down. We’ve been working on matchup zone, and we bothered them a little bit with that.”

Koryn Greiwe went 10 for 10 from the free-throw line, including 8 for 8 in the fourth quarter, and finished with 18 points to pass Shelby Ross for second place on the Olympians’ all-time scoring list. Greiwe now has 1,362 points, trailing only Maria Stack’s 1,518.

“The star of the game to me was Harley Gant,” Brown said. “She just played great throughout. She played a great game inside. She was a big difference make for us tonight.” 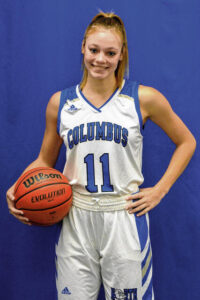 Kylah Lawson scored 15 of her 21 points in the second half to lead North. Lauren Barker added 16 points, and Kathryn Wilson came off the bench to score a career-high 10.