COLUMBUS, Ind. — The father of a missing 2-year-old girl whose body was found in a debris field in the East Fork White River on Sunday has been charged with Level 1 felony neglect of a dependent resulting in death, unlawful possession of a syringe and also as a habitual offender.

Jeremy Sweet, 39, of 1415 N. County Road 850E., has been held in the Bartholomew County Jail without bond since Monday after he was initially hospitalized suffering from hypothermia and frostbite after being found in his submerged pickup truck in the river at 6 a.m. Friday by duck hunters.

Sweet and Emma were last seen together in his black Ford F-150 pickup at noon Nov. 24, and were reported missing by family members on Nov. 25, which was Thanksgiving Day.

An autopsy was conducted for Sweet’s daughter, Emma, after she was found at 11 a.m. Sunday in the river by a firefighter walking the riverbank about 2 1/2 miles downstream from where the truck was found.

The charges, filed in Bartholomew Superior Court 1, accuse Sweet of knowingly or intentionally placing his daughter in a situation that endangered her life and health and resulted in her death. He is also accused of Level 6 felony possession of a hypodermic syringe, which investigators said was found on his person when he was taken to Columbus Regional Hospital on Friday.

A Level 1 felony conviction in Indiana carries a prison term of 20 to 40 years in prison and a fine of up to $10,000, according to state statutes.

An autopsy was conducted for Sweet’s daughter, Emma, after she was found at 11 a.m. Sunday in the river. Results from that autopsy are not expected for four to six weeks.

The charges accuse Sweet of knowingly or intentionally placing his daughter in a situation that endangered her life and health and resulted in her death.

Detectives attended the autopsy for Emma Sweet at Columbus Regional Hospital on Monday and preliminary findings were undetermined as to whether hypothermia or drowning is the cause of death, the probable cause affidavit states. There was no trauma found to her body and toxicology results are pending, the affidavit states. 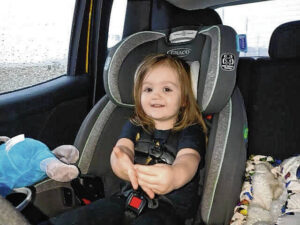 This photo of 2-year-old Emma Sweet in her car seat was provided by Bartholomew County Sheriff’s Department when they issued an alert Friday morning that she was missing.