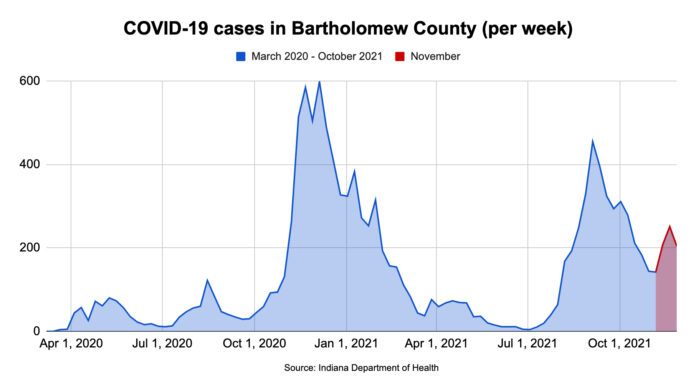 COLUMBUS, Ind. — Local health officials say it is likely only a matter of time before the new omicron coronavirus variant that has set off alarm bells around the world is detected in Bartholomew County.

The variant, first identified last week by South African authorities, has prompted dozens of countries to restrict travel and take other measures to buy time as scientists scramble to determine how dangerous it is.

On Wednesday, the United States joined at least 23 other countries reporting omicron infections over the past week after officials said a tourist returning to California from South Africa tested positive for the variant. A Minnesota resident who recently went to New York City became the second person in the U.S. known to have contracted the omicron variant, officials said Thursday.

It’s not known yet how deadly or contagious the omicron variant is or whether it can evade protection from vaccines. But the uncertainty surrounding the variant has raised concern among local health officials, particularly as they are already contending with another rise in coronavirus cases and hospitalizations.

There were 33 people hospitalized with COVID-19 at Columbus Regional Hospital on Sunday, up from 19 the week before and 10 on Aug. 14. Earlier this week, state health officials reported 87 coronavirus cases in Bartholomew County in a single day — the third highest daily total reported locally this year.

“We expect to see the variant in our state/community at some point, we just don’t know when,” said CRH spokeswoman Kelsey DeClue. “In the meantime, we’re still dealing with another rise in current COVID-19 infections with the delta variant, which is concerning.”