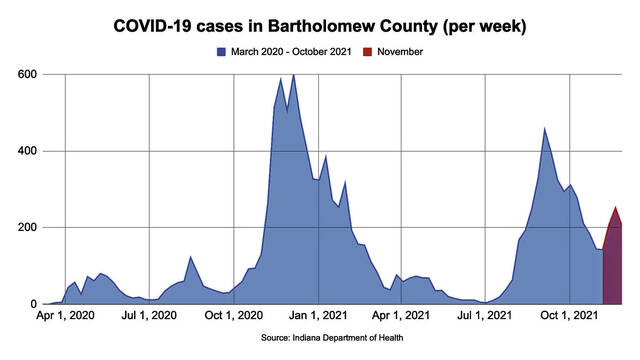 Local health officials say it is likely only a matter of time before the new omicron coronavirus variant that has set off alarm bells around the world is detected in Bartholomew County.

The variant, first idenTIFied last week by South African authorities, has prompted dozens of countries to restrict travel and take other measures to buy time as scientists scramble to determine how dangerous it is.

On Wednesday, the United States joined at least 23 other countries reporting omicron infections over the past week after officials said a tourist returning to California from South Africa tested positive for the variant. A Minnesota resident who recently went to New York City became the second person in the U.S. known to have contracted the omicron variant, officials said Thursday.

It’s not known yet how deadly or contagious the omicron variant is or whether it can evade protection from vaccines. But the uncertainty surrounding the variant has raised concern among local health officials, particularly as they are already contending with another rise in coronavirus cases and hospitalizations.

There were 47 people hospitalized with COVID-19 at Columbus Regional Hospital on Wednesday, up from 19 on Aug. 21 and 10 on Aug. 14. Earlier this week, state health officials reported 87 coronavirus cases in Bartholomew County in a single day — the third highest daily total reported locally this year.

“We expect to see the variant in our state/community at some point, we just don’t know when,” said CRH spokeswoman Kelsey DeClue. “In the meantime, we’re still dealing with another rise in current COVID-19 infections with the delta variant, which is concerning.”

Bartholomew County Health Officer Dr. Brian Niedbalski said he expects to see local cases of the omicron variant at some point but not enough is currently known about the new strain to determine what the potential public health ramifications could be.

“I think there needs to be some concern and caution in regards to the omicron variant.” Niedbalski said. “At this time, though, there needs to be more data in hand to determine the transmissibility of the virus and the severity of symptoms it causes.”

Experts say it could take weeks to fully understand the threat the omicron variant poses. The variant’s emergence has already alarmed health officials around the world and injected a fresh round of uncertainty into a pandemic that has killed at least 190 Bartholomew County residents since April 2020. As of Thursday morning, no deaths had been associated with the new variant.

The World Health Organization has designated omicron as a “variant of concern,” its most serious designation of a COVID-19 variant, and said earlier this week that preliminary data suggests that there could be an elevated risk of reinfection with omicron as compared to other variants.

Additionally, the United Nations health agency reported increasing rates of hospitalization in South Africa, but said that could be due to a general increase in infections in the country and not necessarily a result of omicron infections.

Niedbalski said he will be monitoring cases in areas where the variant has already been detected.

“It will be important to gauge if there are surges in multiple other countries due to this new variant,” Niedbalski said. “If these surges occur abroad, then it is only a matter of time before we start seeing another increase in cases here.”

In the meantime, local health officials are urging people to mask indoors, avoid crowds and to get vaccinated if you are among the roughly 32,000 eligible Bartholomew County residents who still haven’t gotten their shots.

“We continue to recommend the same actions we always have — get vaccinated or get a booster if you had the first series of vaccine, continue to mask in public and indoor settings regardless of vaccination status, stay home if you’re sick, except to seek care. Get your eligible children vaccinated. Stay vigilant. Avoid places and situations where high spread is likely and the ability to mask and social distance is difficult,” DeClue said.

Niedbalski said he is optimistic that the vaccines will provide “enough protection” against the omicron variant and doesn’t currently anticipate reinstating public health measures aimed at curbing spread of the virus — indoor masking requirements or capacity restrictions at stores, restaurants and gatherings — but didn’t rule them out in the future.

“I don’t anticipate implementing restrictions at the local level, but will always reserve that right if necessary,” he said.