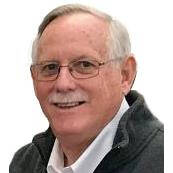 Larry Meredith Moore, 71, of Columbus, IN passed away on Tuesday, January 11, 2022 at Columbus Regional Hospital as a result of COVID-19.

Larry was born June 15, 1950 in South Bend, Indiana to Meredith Moore and Norma Eilene (Wild) Moore. Larry graduated from Lebanon Senior High School in 1968 and received an Outstanding Industrial Arts Student Award for his work in mechanical design and drafting.

Larry met Anne Elizabeth (Hutchinson) Moore in 1972 while working summer jobs at the Lucky Steer Steakhouse in Lebanon, Indiana. They married on Dec 4, 1976 and moved to Columbus the same year.

Larry spent his 43-year career serving a wide variety of roles at Cummins Inc. with 33 years as a key part of the team designing, developing, prototyping, and building engines for the Ram pickup truck. He was a member of the original team of engineers who integrated the Cummins B-Series engine into the 1989 Dodge Ram pickup. He was widely recognized by colleagues as a vital part of the long-term success of the Cummins/Chrysler partnership. He was the cross-functional Program Manager for the 2003 and 2004.5 model year Ram Turbo Diesel engines and the Plant Program Manager for the 2005-2019 model year Ram Turbo Diesel engines. He also played a variety of other roles at Cummins including working in Service Engineering, High-Horsepower Engines, and Automotive Marketing.

Larry was a devoted auto racing enthusiast throughout his life. He served on a variety of race team pit crews and raced his own car in Sports Car Club of America (SCCA) in the early 1980s. In recent years, Larry served on the selection committee for the annual Society of Automotive Engineers (SAE) International Louis H. Schwitzer award for new concepts in racing technology at the Indianapolis 500. He also worked extensively on the restoration of Cummins Diesel Indianapolis 500 race cars.

Larry was a devoted friend, son, brother, husband, father, and grandfather. His friends and family always came first. He adored his four grandchildren and created lasting memories for them during visits to their home in Colorado and while showing them how to pilot a boat at his vacation home on Lake Tippecanoe. Larry was a lifelong sports fan, cheering on Columbus East High School, Purdue University, and the Indianapolis Colts every year. He traveled around the world and especially enjoyed visiting the United Kingdom, Australia, and New Zealand. In New Zealand, he treasured the experience of taking the helm of a retired America’s Cup yacht.

Larry was a victim of the COVID-19 pandemic. While fully vaccinated against the virus, his history of having previously survived the 2009 H1N1 pandemic made him especially vulnerable to the effects of COVID-19. He spent nearly a month fighting COVID-19 but was unable to recover. He retained a positive outlook throughout these harrowing experiences until the very end.

The family requests that contributions in Larry’s memory be made to Love Chapel Food Pantry, 292 Center St, Columbus, IN 47201, lovechapel-bartholomew.org.

No public service will be held due to the COVID-19 pandemic, but a life celebration will be held via Zoom video conference on February 5 at 2PM. Please register for the event at larry-moore-memorial.org.