After scoring a 106.3 in their season opener, the Columbus North gymnasts have been in the 104s ever since.

Thursday night, the eighth-ranked Bull Dogs scored in the 104s for the fourth consecutive time in a 104.25 to 99.725 win against Bloomington South.

“It wasn’t our best meet,” North co-coach Bob Arthur said. “Our girls are still working on putting some things together. We certainly haven’t peaked, but we’re not moving as quickly up the scale as I would have hoped to by now.” 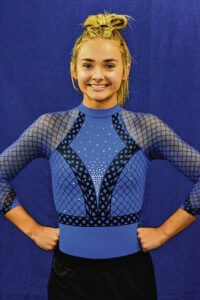 “Our main thing right now, is we need to focus on the third and fourth gymnasts and get those scores up because that’s the low-hanging fruit,” Arthur said. “It’s not that they don’t have the difficulty or the bonus. Most of it is just execution errors. They just simply are getting smacked down on execution right now.”

“I think it was an OK meet,” North co-coach Kaitlyn Rediker said. “There’s definitely areas where we can improve. We’re working on new skills that can be added into routines that just weren’t ready for this meet tonight. They’ve been working really hard to try to get their skills and their scores up. We’ve been working on a lot of different skills to improve those routines. We just have to get them down. We’re hoping they’re ready for next week and especially for sectional.”