The Columbus East wrestlers have won six consecutive Jennings County Sectional titles, and the Olympians have advanced entrants to regional in all 14 weight classes in three of the past five years.

East will look to continue that trend on Saturday when it competes in the Jennings County Sectional. The top four in each weight class qualify for the Feb. 5 Jeffersonville Regional.

“The goal is to get 14 through,” East coach Chris Cooper said. “That’s what we got last year. That’s definitely the plan. A lot of it is setting us up in good position for the regional next week.”

Law, who is ranked No. 2 in the state at 160, finished third at state in that weight class last year. Krueger was a state qualifier at 106.

“The main thing is, don’t take anything for granted,” Cooper said. “We tell them all the time that I believe we’re the best team, but you have to prove it every single time we wrestle.”

Meanwhile, Columbus North has enjoyed its best season in several years. The Bull Dogs went 14-5 in dual meets, their first winning record since 2013. 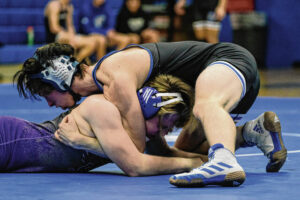 North owns wins over Seymour and Jennings County, the other two top contenders for the runner-up team spot.

“I think a lot of it is going to come down to how kids perform and how they respond, especially guys that end up in the wrestlebacks,” North coach Matt Joyce said.

“We’ve stayed on track,” Joyce said. “We’ve met just about all of our goals this season. We have some goals as far as sectional, regional, semistate and state to meet. The kids have been working hard, and I like our chances of getting quite a few kids through.”

“We’re just going to try to get our guys to place as high as they can and get to regional,” Jennings coach Jeff Morrison said. “My philosophy is similar to (former) coach (Howard) Jones’s that you try to get better as the season goes on, and I think we’re peaking at the right time.”

Brown County has only two wrestlers. Brandon Phelps (160) is a No. 5 seed.

Action begins at 9 a.m. Saturday. Championship and third- and fifth-place matches likely will start around 2 p.m.