He was born in Kentucky and died in Iowa, state police said. They declined to comment on details from his obituary that indicated he had been an employee of Canadian Pacific Railroad. His death date was listed as Jan. 13, 2013 and that he had lived in New Albin, Iowa.

State police said he had an extensive criminal history who had escaped from jail twice and was known to law enforcement.

Investigative genealogy involves using a DNA sample from a suspect and running it through analysis which shows family matches, which can identify parents, siblings, cousins, etc. Then investigative analysis is used to narrow down the family connections shown in the DNA analysis to identify who the DNA belongs to.

The practice of individuals submitting their DNA to public companies to determine their ancestral origins has opened up this type of investigation.

Police praised a Columbus, Indiana woman who survived an attack in 1990 for her courage and willingness to assist law enforcement to identify Greenwell, saying her efforts to provide a description and details and DNA evidence that led the genealogy experts and lab experts to identify Greenwell.

The Columbus Police Department was also thanked for its assistance in the cold case investigation. Lt. Matt Harris, CPD’s public information officer, spoke at the press conference in Indianapolis on Tuesday.

While the announcement clears the Indiana and Kentucky cases that were noted, state police said that since I-65 goes from Gary, Indiana to Mobile, Alabama, investigation continues into murders, rapes, robberies and assaults that have occurred along the I-65 corridor to determine if any of them are connected to Greenwell.

Victim photos from the I-65 Killer case

Peggy Gill was working at a Days Inn in Merrillville on March 2, 1989 when she was forced from her work station, investigators said. She was reported missing the next morning and police found money missing from the hotel’s cash drawer. Her body was found in a vacant hallway and police said she had been raped and shot twice in the head.

A Rensselaer hotel employee, Jeanne Gilbert, was killed soon after that after being taken from the Remington Days Inn. She had been sexually assaulted and shot and her body was found on a county road in White County.

In 1990, Columbus was linked to the cases when a woman working at a hotel near I-65 was sexually assaulted and was stabbed, but survived the attack. In that case, the victim described the man as having green eyes and a lazy right eye. 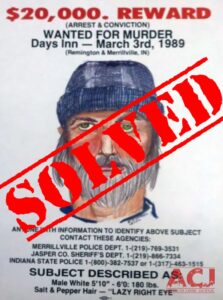 INDIANAPOLIS — Indiana State Police will release new information about the cold case of the “I-65 Killer” or the “Days Inn Killer” who is believed to be responsible for as many as three murders and several assaults in the 1980s and 1990s.

A Kentucky woman, Vicki Heath, was sexually assaulted and shot twice in the head on Feb. 21, 1987. Her body was discovered behind a Super 8 Motel off I-65 in Hardin County, Kentucky, state police said

DNA from that case was matched to at least four other cases spanning other states, state police said. The victims were motel clerks who worked in businesses along I-65, who were all robbed and sexually assaulted, which police then attributed to a “traveling serial killer.”

Also linked to the cases were two women sexually assaulted and murdered in 1989 in northern Indiana.

In 1990, Columbus was linked to the cases when a woman working at a hotel was sexually assaulted and was stabbed, but survived the attack. In that case, the victim described the man as having green eyes and a lazy right eye.

The next year, a victim in Minnesota who also was sexually assaulted and stabbed gave a similar description, saying the man was a white male, 6 feet to 6 feet 2 inches tall with green eyes.

More information is expected to be released by Indiana State Police after a press conference this morning. For more, check back here or pick up a Wednesday Republic.