Magician/comedian/ventriloquist Andy Gross grew tremendously popular when he began approaching his act via a different slice of life.

As in sawing himself in two and posting a video clip on YouTube.

“That’s the power of the internet,” he said, speaking from his Los Angeles office.

Soon enough, he began to get invitations to do shows in London. Paris. Barcelona. Dubai.

“I absolutely did,” he said, still sounding incredulous.

But the slicing? He absolutely did not.

But it’s convincing enough that he has done it for his promotional clips even at city parks and frightened the bejabbers out of some nearby folks. Which shows, perhaps, that he hardly approaches his trickery halfway.

The 53-year-old Gross brings his whole 90-minute show, which is about 80 percent magic, to the Brown County Playhouse at 7:30 p.m. Saturday in Nashville. For a guy doing 120 shows annually, he cannot get enough.

“I love the road, and love seeing all the places,” he said, adding that sometimes wife, April, comes along.

His road to his current life traveled through the professional racquetball circuit until his mid-20s (“It was the greatest life ever”) — and until the sport’s sponsor support and more took a whack. He had loved magic and comedy since his boyhood and began doing open-mic nights. And his act is now polished enough to have been highlighted on such TV programs as “The Ellen DeGeneres Show.”

He laughed when asked what he says when astonished viewers ask after a stunt or trick “How did you DO that?”

“Very well, thank you,” he laughingly responds. “Actually, deep down, people don’t really want to know. They want to be fooled. They want to feel like a kid again. They would be disappointed if they found out.

“I mean, nobody goes to the ballet and trips the dancers.”

“Magic is really misdirection,” he said. “With ventriloquism, it’s the same thing.”

His most talked-about segment of that part of his show is where he throws his voice, making it seem as though it is coming from somewhere other than himself. In one instance, it becomes the muffled voice of a dummy locked in a trunk. His most popular puppet is Steve, the customer service representative calling to help remove a computer virus.

Away from the spotlight, he still plays some racquetball, but his vocation and avocation occasionally blend.

“For me, sometimes the most relaxing activity is building a dummy,” he said.

But he also collects old ventriloquist dummies, including from vaudeville and other eras. Sometimes, people bring them to his shows and give them to him to add to his collection of 200 or more.

“It takes a little of the stress off,” he said. 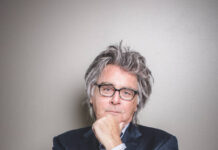 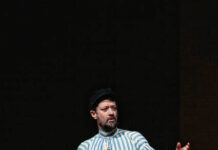