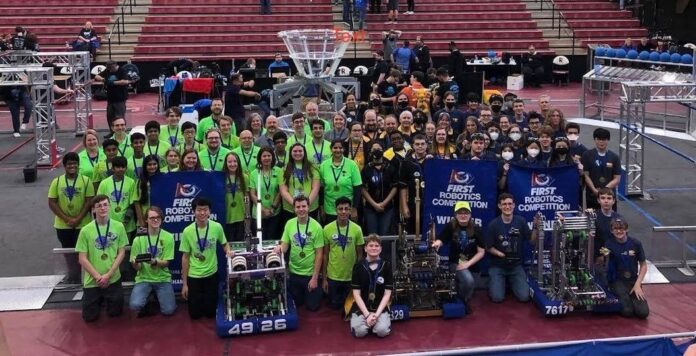 GalacTech finished its qualification matches at 6-4 Friday and is ranked 30 at the international competition. The team has been selected for an alliance and are advancing to playoffs within their division on Saturday.

HOUSTON, Texas — Local high school students continue to compete against and alongside teams — and robots — from all over the world.

Team 4926, or “GalacTech” is at the For Inspiration and Recognition of Science and Technology (FIRST) Championship in Houston. Qualification matches began Thursday. As of about 3:30 p.m. Friday, the team was 5-4 and ranked 30th in its division. Its 10th and final qualification match was scheduled for 4:55 p.m. EST Friday.

Games are being livestreamed over Twitch; links are available at firstchampionship.org/watch. Times are subject to change, and the schedules are listed in Central Time.

During the championships, each team is assigned to one of six fields — each named after a renowned scientist — and six competitions run in parallel, said Columbus Robotics president and team founder Sam Geckler. Each of these six competitions will produce a winning alliance, which then advances to Einstein Field for a round robin tournament and finals. Ultimately, one of these six alliances — each made up of four teams — will win the entire championship.

GalacTech is one of 75 teams competing in the Hopper division. The field’s last qualification match is scheduled for 5:30 p.m. EST ; after that, the division rankings will be final, said Geckler. According to competition rules, the top eight teams in the division will each get to select three other teams to join them in alliances. Alliance selection is scheduled for 8 a.m. EST on Saturday.

If one of the top eight teams accepts an invitation to join another team’s alliance, the top teams move up accordingly, as does the next-highest, unselected team beneath them, filling the vacant spot. Ultimately, eight alliances each made up of four teams will compete in division playoffs, with the winning alliance advancing to Einstein Field to compete against the other division champions.

Playoffs within the six divisions are scheduled to take place from 9:30 a.m. to 12:30 p.m. EST Saturday. The Einstein round robin tournament, followed by finals, is expected to begin at 3:15 p.m. EST.

About 450 teams from all over the world are competing at the FIRST Robotics Competition level. So far, GalacTech has worked alongside teams from as close as Illinois and as far away as Turkey.