HOPE — In selecting its new boys and girls basketball coaches, Hauser went with individuals who have close ties to the school and community.

Trent Moorhead, who spent the past year as junior varsity coach for the Jets and is a teacher at Hauser, has been named boys basketball coach. Shelbyville assistant athletics director Kyle Shipp, who lives just outside of Hope, is the new girls basketball coach.

“First and foremost, the people in the school at Hauser are first class,” Shipp said. “Then, the second thing that was attractive is, we just live right down the road from Hauser and just built a house there. Anytime you’re looking at moving jobs, you want to make sure the people are first class, and Flatrock-Hawcreek and the people there are first-class in everything that they do.”

Shipp is a 1999 Whiteland graduate. He played football, basketball and baseball for the Warriors and played football at St. Francis for two years before graduating from IUPUI.

Shipp’s wife Amy is a Hauser graduate and has been the athletic trainer for the Jets. She now is a physician extender within Columbus Regional Health.

“Our kids will eventually go to Hauser,” Shipp said. “They play youth sports within Hope Elementary and Hauser biddy basketball and those kind of things. I will be essentially at home going to work every single day.”

Shipp, who has been assistant athletics director at Shelbyville the past two years, will be some type of Dean in the junior or senior high school at Hauser. He takes over a girls basketball team that went 10-13 last season.

“I will conduct individual meetings with players and parents and hopefully put a footprint on a program from K-12 as we get started this spring and summer,” Shipp said. 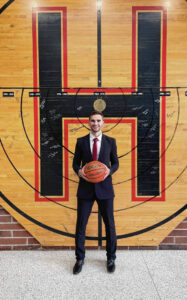 Trent Moorhead poses in front of the old center court at the entry to the Hauser gym Tuesday after being named the Jets’ new boys basketball coach.

Moorhead, meanwhile, is a math teacher at the high school. He previously had spent three years as JV coach at Franklin after graduating from Indiana University in 2018.

While at IU, Moorhead coached the seventh-grade team one year and was varsity assistant one year at Edgewood.

“I kind of got two years of bonus coaching experience when I was in college, which really helped me out a lot when I was getting started,” Moorhead said.

“The coaching background in my family has helped me out a lot,” Trent said. “I’ve had great support. I loved watching my dad going through that path, and I’ve heard about my grandfather’s teams. That’s what made this so special, being at Hauser right now, to continue that legacy that my family has.”

The Jets went 11-14 last season, but started two freshmen and played two others.

“The future is bright,” Trent Moorhead said. “We have some really strong classes that are coming through. Then, we have some older guys that will be able to compete and perform, as well, so it should be exciting. I’m thrilled to be here at Hauser. The community here and the way value high school basketball, it’s very important here, and that’s very important as a coach, they way they support the program.”