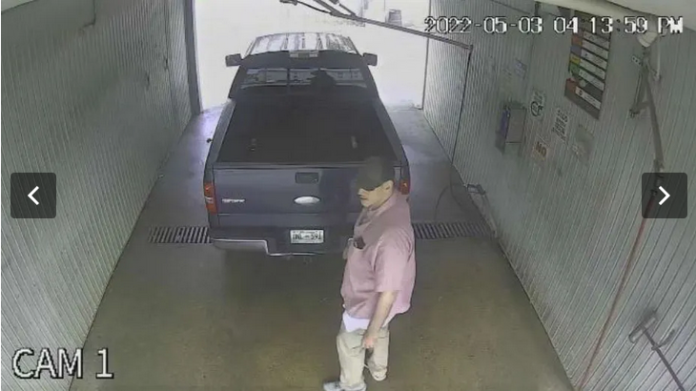 From our newsgathering partners at WISH TV

EVANSVILLE, Ind. — U.S. Marshals have released photos of who they believe is Alabama fugitive Casey White caught on surveillance camera at an Evansville, Indiana, car wash.

This is the first time since White escaped a detention center with corrections officer Vicky White that he reportedly has been spotted.

Vicky White was not seen in the photos released Monday by U.S. Marshals.

Investigators were notified on Sunday night that a 2006 Ford F-150 had been discovered at a car wash in Evansville, about 175 miles north of Williamson County, Tennessee, where the 2007 Ford Edge the pair had been traveling in was found abandoned.

The new charges stem from her using an alias to purchase the vehicle used in the escape, a 2007 Ford Edge, officials said. The warrant shows Vicky White is wanted on charges of forgery and identity theft.

Vicky White, who was an assistant director of corrections for Lauderdale County, took Casey White from the county jail on April 29, saying she was taking him for a mental health evaluation, which authorities learned later had never been scheduled. She then said she was going to get medical care after dropping the inmate off because she wasn’t feeling well.

The two have not been spotted since, and Vicky White’s use of aliases may be complicating the search for the two, Lauderdale County Sheriff Rick Singleton said Monday.

“If she was using her own identity, that would make it fairly easy for us to maybe find her,” Singleton told CNN’s Bianna Golodryga. “We do know she used a false identification to purchase a car here locally.”

“She had two false IDs that we’re aware of, and I wouldn’t be shocked if she had additional or new ones now,” the sheriff said.

Surveillance video footage of Vicky White taken before the getaway shows the level of preparation that went into the escape, Singleton said.

Investigators found footage of White shopping for men’s clothes at a department store and at an “adult store,” Singleton said, adding she “obviously had a change of clothes” for the inmate.

“It just tells us that it was very well planned and calculated,” Singleton said. “Obviously she well-planned this escape down to a T.”

Investigators earlier released video footage showing Vicky White at a Quality Inn in Florence, where she stayed the night before the escape more than a week ago.

The patrol car the officer and inmate took from the jail was found abandoned in a shopping center parking lot. Vicky White’s jail keys, radio and handcuffs were found inside. Authorities believe the pair left the lot in a different vehicle: Vicky White’s 2007 Ford SUV she parked in the lot the night before.

The vehicle was spotted on May 6 at a Tennessee tow lot. The car had been abandoned in the woods without any identifying information on the same day the duo escaped, indicating they drove about two hours north from the jail in Florence, Alabama, to Williamson County, Tennessee.

“We know now where the car is, we know what direction they went,” the sheriff said. “We’re trying to canvass the area for any witnesses, also trying to research, see if any stolen vehicles were reported in that area during that time.”

Authorities believe the vehicle may have had mechanical problems that prompted the abrupt stop in the area.

For now, investigators are in the dark as to where the pair headed after that, the sheriff said Monday.

“We don’t have any information or intel about how they left that area,” Singleton said. “There are all kinds of possibilities. We are looking at every possible scenario we can think of,” the sheriff said when asked if someone could be helping them.

It is possible, given the time the two have been on the run, they are no longer in the country, the sheriff said.

“That’s something we’re also considering and trying to follow up, especially with Mexican and Canadian authorities,” Singleton said.

Vicky White, 56, and Casey White, 38, who are not related, knew each other since at least 2020 and had developed a romantic relationship, the sheriff told CNN earlier this week.

Prior to their disappearance, Vicky White had announced plans to retire and sold her home for a price well below market value.

She now has an active arrest warrant for allegedly permitting or facilitating escape in the first degree. She is no longer employed by the sheriff’s office, the office said, adding while April 29 was her last day of work, her retirement papers were never finalized.

Investigators believe Vicky White had a large amount of money when the pair vanished, Singleton said, adding authorities are working to find out more details.

“Like us, she’s at a total loss. She did not know this side of her daughter, obviously, and she’s very distraught,” he said.

The pair should be considered dangerous and may be armed with weapons including an AR-15 rifle, handguns and a shotgun, the US Marshals Service said.

The agency said Casey White threatened his ex-girlfriend and her sister in 2015 if he ever got out, “he would kill them and he wanted police to kill him.” Authorities have warned the inmate’s “potential targets” and taken measures to protect them, the Marshals Service said.

Investigators are also concerned Casey White may not be taking medication for “controlling temper and those kinds of things,” Singleton said Monday.

“He has some issues that he’s on medication for, and when he’s off his meds, I’m told he can be extremely violent,” Singleton said.

The service also released several photos of Casey White and his tattoos as well as photo renderings of what Vicky White, who was blonde when she vanished, would look like with darker and shorter hair.

The agency is offering up to $10,000 for information leading to the capture of the inmate and up to $5,000 for the officer.

On Friday, Alabama Gov. Kay Ivey announced additional rewards of $5,000 each for information leading to the capture and arrest of Vicky White and Casey White.