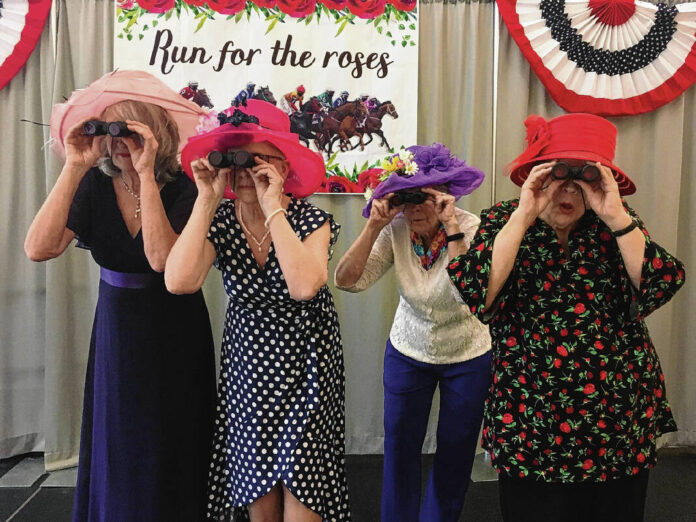 Members of The Lasting Impressions local theater troupe thought it would be wonderful to find a way to resurrect their colorful Easter hats after a 2021 holiday production.

Amid that idea was born their upcoming show, in which their recycled, motley toppers give them the obligatory Southern belle look for an in-show visit to the Kentucky Derby, where hearty headgear has become almost larger than the event itself just down Interstate 65.

Such is part of the originally scripted dinner theater musical “Off to the Races and Other Places” slated May 20 and 22 at Mill Race Center in Columbus. Sadie’s Catering, long popular with the 50-plus set, will serve the meal.

Director and troupe founder Donna Browne conceived of the presentation that also includes another jaunt down the interstate to Bardstown, Kentucky, home of the popular “Stephen Foster Story” celebrating the folk composer.

“I’ve always enjoyed that show,” Browne said of some the creative seeds of the script. “It features such beautiful music with a beautiful cast and a beautiful story.”

Clearly, given the performance dates this time of year and the 12-member troupe’s respect for military veterans, you perhaps already figure that Browne also has a salute segment in the show, too. According to her script, she and her cast mates make an in-show journey to the National Mall in Washington, D.C. There, they will croon tunes “A Veteran’s Salute,” “A Prayer for All Who Serve,” and “More Than a Name on a Wall” about the Vietnam Wall.

Last year, when the group performed a Veteran’s Day set, about 200 people attended at Mill Race Center. Browne said they would love to see such a crowd this time, too.

Helping the audience shift from one locale to another will be the handy backdrops and signage created by troupe member Geneva Foster.

“I really like crafting and I really like art,” Foster said. “And Donna trusts me on my ideas that I come up with.”

It helps that husband John Foster is providing background sound for the Derby, and also for the Indianapolis 500 segment that is a part of celebrating the whole month of May’s festivities. For that revved up portion, performers will be singing “On the Banks of the Wabash,” “Back Home Again in Indiana,” and “The Star Spangled Banner.”

Browne has chuckled in the past about her somewhat driven sense in preparing shows, sometimes writing until the wee hours of the morning. But she passes credit for much of this planned event to her troupe members themselves.

“We have an absolutely tremendous cast,” she said.

Who knows? The audience could very well agree — and offer a hats-off ovation.