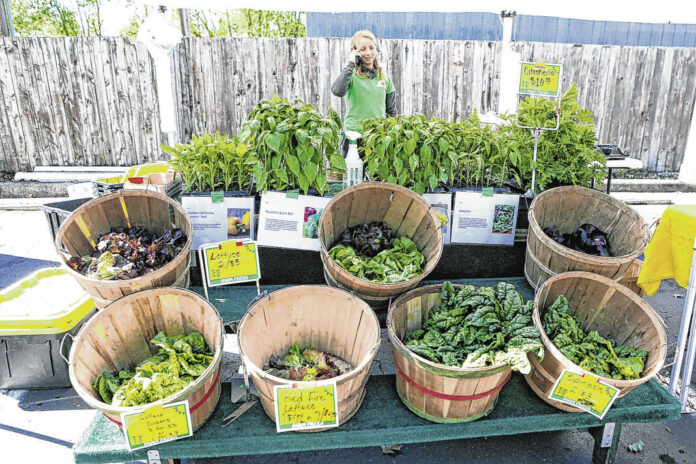 The Columbus Farmers Market behind City Hall got back in business for the season last weekend, bouncing back from a pandemic lull that significantly reduced offerings and attendance last year.

It may be early for tomatoes and summer produce, but about 100 vendors have signed up through spring and summer, offering everything from freshly cut flowers to crafts to prepared food to go. When the weather cooperates, an easy-going Saturday morning at the market, complete with music and entertainment, nurtures and warms body and spirit.

About 50 vendors turned out for opening weekend last Saturday — more than twice the average number last year, when we were still social distancing due to COVID and crowds were down to about 400 from the typical 1,500 each Saturday.

The market is back on the path to its pre-pandemic form, open every Saturday through Sept. 17 from 9 a.m. to 12:30, rain or shine. Throughout the season, you’re sure to find homegrown local offerings, including good stuff you won’t find anywhere else.

Raise a glass: Cheers to ZwanzigZ

Speaking of quality Columbus originals, our very own ZwanzigZ Pizza and Brewery can now add “world class” to the list of superlatives describing its delectable food and drink. That’s because last week, judges sipping 96 different American-style imperial stout beers from around the globe awarded the gold medal to ZwanzigZ’s Fulcrum Imperial Stout.

Recognition in the Brewers Association’s World Beer Cup international competition is new for ZwanzigZ, though two of its brews previously won national honors in competition. As the ZwanzigZ brewery celebrates its 10th year and the restaurant its 20th in 2022, the establishment’s many accolades also include being named Small Brewpub of the Year at the Great American Beer Festival in 2016.

Loyal locals know, as witnessed by the throngs of patrons who frequent the establishment at 1038 Lafayette Ave. The latest honor is just one more that makes ZwanzigZ a destination whose reputation lures foodies far and wide. Cheers to founders Kurt and Lisa Zwanzig, brewmaster Mike Rybinski and the staff at ZwanzigZ. Your standard of excellence gives the Columbus area yet another distinction to boast about!

Speaking of local things to brag about, Columbus-based Toyota Material Handling now has some hands-on Ivy League credentials. The company and Cornell University recently announced development of a Forklift Learning Studio to be built and developed this summer so that students at the Ithaca, N.Y., institution’s college of engineering can learn from it starting with this year’s fall semester beginning in August.

Toyota will donate forklifts and lend its name and expertise to a partnership that gives students a lab experience to see in practice what they learn through lectures. Toyota said forklifts are a perfect fit for the lab because they do the heavy lifting of delivering on all aspects of a mechanical engineering curriculum — thermofluids, structural mechanics and dynamics and controls.

“I anticipate that the model we’ve formed with Toyota will be replicated in programs that span the entire college,” said Lynden Archer, the Joseph Silbert Dean of Engineering at Cornell.

That’s one more distinction for Toyota Material Handling, which already can brag of its status as an employer of choice and an organization long studied by academics (and its competitors) for its culture of quality and continuous improvement.