After going down to the wire in last year’s Franklin Sectional and Regional, the Columbus North and Center Grove girls track teams figure to wage tightly-contested battles again the next two Tuesdays at Franklin.

The Trojans have won six consecutive sectional titles since the Bull Dogs won three in a row from 2012-14. But last year was close, with Center Grove edging North by six points in the sectional and five in the regional.

The Bull Dogs are ranked 10th in this week’s Indiana Association of Track and Cross Country Coaches poll, one spot behind the Trojans.

“We always want to compete to win that sectional title,” North coach Rick Sluder said. “That’s our goal every year. Center Grove is going to be very good. Whiteland will have good athletes, but it will be us and Center Grove. Getting as many people as we can to regional will put us in contention with Center Grove at the same time.”

“Our throwers have been looking very good on the girls side the last two weeks,” Sluder said. “I would expect both of our girls to be competing to go to the regional in both events. Our jumpers are getting stronger. Our long jumpers were both over 16 (Tuesday) night (in a dual meet at Franklin), and that will put them in contention, and both our vaulters, if they can be at the top of their game, they’re going to have a chance to go on. Then our relays and our sprints have been progressing really well. So I think up and down the board, we have a shot to send a lot of people to the regional.” 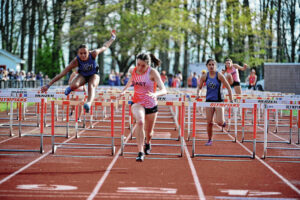 Columbus East’s best chance of advancing to regional is in the 100, where junior Emma Gray is seeded second. The Olympians also are seeded third in the 4×400 relay.

“Our goal this time of season is to get those individuals to move on to regional,” East girls coach Jesse Shoaf said. “We’d like to get our relays out, and then we have some individuals in some other events. We hope Emma Gray can get out in the 100 and maybe the 300 hurdles. Our 400 girls, Norah Dwenger and Jenna Guse, both of them are pretty strong, and Megan Tracy in the throws, so we’re hoping that those can make it out. Then, we might have a few other ones that might surprise us.”

The Franklin Sectional will begin at 5:30 p.m. Tuesday and will feature in teams, including Hauser and Edinburgh.