Imani Guy is headed to the Land Down Under.

The former Columbus North and Marian University star has signed to play professional basketball in Australia. She will play for the Eastern Suns in the NBL1, the premier semipro basketball league in Western Australia.

“My agent asked me if I had any interest in Australia, and I told her ‘Yeah,’ and she told me it would be really soon since they’ve already started over there,” Guy said. “But because of injuries and people going back home, they were looking to recruit players. The Eastern Suns were looking for a post player, so it seemed like a really good fit.”

The Eastern Sun have only one other American on the team. Most of the squad are native Australians.

“I’m really looking forward to playing in games again and being in a team environment,” Guy said. “I’m going to be thrown right into it because the season has already started.” 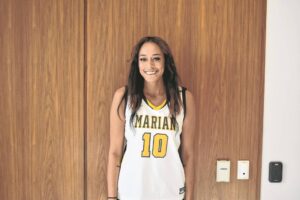 Despite playing only three years at Marian after transferring from Southern Indiana, the 6-foot-4 Guy finished as Marian’s No. 7 all-time leading scorer with 1,288 points and ranks No. 3 in points per game with 15.2 and in field goal percentage at 56.7. She ranks fourth in school history in total rebounds (698) and second in rebounds per game (8.2) and blocked shots (161).

This season, Guy led Marian to a 30-5 record and a Crossroads League regular-season title. She led the Knights with 16.0 points and 8.5 rebounds a game, as well as 58 blocked shots, ranking in the top 100 in NAIA in all three of those categories.

Guy plans to continue taking classes online this summer and is still hoping to earn her degree in communications with minor in writing in December.

Guy plans to leave next week for Perth, Australia. The Australian season runs through mid-September, and after that, she hopes to catch on with a European team for the winter.

“I think I was just looking for any type of opportunity,” Guy said. “Australia is always a country I would always like to visit, and there is no language barrier, so I thought it would be a really good first team to join. I’m getting paid to do something I love, and I get to travel places. I’ve never been out of the country, so this will be a whole new experience.”