The third-ranked Columbus North girls tennis team wasted no time in repeating as sectional champions when it picked up a 5-0 win over Brown County in the championship match.

Even though the Bull Dogs only dropped three games during the match against the Eagles, North coach Kendal Hammel said that the match was closer than what the final scores indicated.

“I thought they did pretty well. Today was windy all-around, and it was tough for everybody,” Hammel said. “I thought the match with Brown County was a nice match for us to play. They pushed us even though the scores don’t show it. We had some good competition. I thought we played really well in that aspect.” 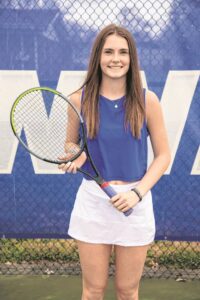 “We had everybody in a new position this year, so we’re definitely building,” Hauser coach Molly Crabtree said. “We’re definitely going to get better. Getting them in these new positions in hopes that maybe next year we’ll do even better. That’s the hopes and I think they’re good girls that are willing to learn.”

North (14-3) turns its focus to Tuesday’s regional semifinal that will be played at Bloomington South.

“We’re going to keep working on the basics for the doubles specifically and also singles not being injured and being ready to play and focus on stuff,” Hammel said. “We’re looking down the road for what we need to get ready to play for. The competition is going to be a little stronger, and from what they’ve been doing, we’ll step up and do the job.”