WEST LAFAYETTE — The Purdue Board of Trustees named Dr. Mung Chiang, the John A. Edwardson Dean of Engineering and Executive Vice President for Strategic Initiatives, as Purdue’s next president.

During Chiang’s five years at Purdue, he has led his college to its highest rankings ever, even as it has grown dramatically at both the undergraduate and graduate levels. Purdue is currently ranked No. 4 among graduate programs, No. 3 for online programs, and No. 8 for undergraduate education, and is the largest school in the nation’s top 10. Both government and industry-sponsored research funding have set new records, as do the 12 national research centers now housed at the university.

The board said Chiang has played a central role in establishing new relationships with federal agencies in the national security and economic development sectors, and in recruiting new companies to invest and create jobs in Purdue’s Discovery Park District. He spent 2020 as scientific and technology advisor to the U.S. secretary of state on a prestigious Intergovernmental Personnel Act appointment.

Chiang earned a B.S. (Hons.) in electrical engineering and mathematics, and an M.S. and Ph.D. in electrical engineering from Stanford University. He came to Purdue from Princeton University, where in his role as the Arthur LeGrand Professor of Electrical Engineering, he was recognized for a number of innovations in teaching and was the first chairman of Princeton’s Entrepreneurial Council.

The holder of 25 patents, he founded three companies and was named New Jersey’s CEO of the Year in 2014. Among many other academic honors, Chiang received the Alan T. Waterman Award in 2013 as the nation’s top scientist under the age of 40 for his excellence in edge computing, internet congestion, cloud and video optimization, and other research areas. Chiang’s research publications have received over 30,000 citations with an H-index of 81. He has graduated more than 50 Ph.D. students and postdocs, including 24 who have become faculty in research universities.

“It is the highest and most humbling honor to be selected by the Board of Trustees as the next president of Purdue University: the unique and most remarkable land-grant university in the land of the free. Throughout the past 153 years, and spanning from the Wabash River to the moon, generations of Boilermakers contributed to our state, to our country, and to humanity in immeasurable ways. There is no other place like Purdue,” he said.

Chiang also praised Daniels, saying he has built Purdue into the most consequential public university in the United States. “Under Mitch’s leadership, our university attained the strongest academic reputation, from record-breaking enrollment to all-time-high research excellence, from the Ever True campaign to the transformed campus. Purdue led the country in safely reopening during the pandemic, while its financial foundation is fortified stronger than ever before.“

Among Daniels’ accomplishments were freezing tuition for an unprecedented 11 years through 2022-23, the acquisition, launch and growth of Purdue University Global, the creation of Purdue Polytechnic High Schools, the growth and expansion of Discovery Park District, and the transformation of the State Street corridor. 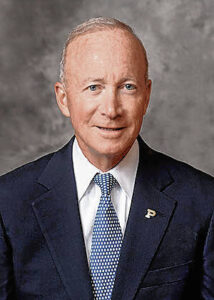