Prior to last weekend, Victory Gymnastics Academy had a grand total of one national champion in its short history.

But last weekend in Orlando, Florida, Victory saw three of its gymnasts crowned national champion in five events. Two of those made the national team for their levels.

“They did awesome,” Victory owner and program director Gary Stam said. “I can’t be greedy, but if everybody would have hit all their routines, we would have had a couple more national champions, which would have been awesome. But we couldn’t believe what we got down three.”

Mackenzie Stamper, who will be a seventh-grader at Central Middle School, won three national titles. She captured the Level 7 11-12-year-old vault and bars and finished fifth on the beam and sixth on the floor to win the all-around title with a 37.825.

“I guess it just took a lot of focus, and I had to tell myself, ‘This is the last meet of the season, Mack. Try to get up there. Try to do the best you can,’ so that’s really what helped me get there,” Stamper said. “It was very exciting. I don’t know if I have any other words to explain how it felt because I was just so excited.”

Stamper had the second-best all-around score of any Level 7 gymnast of all ages. She was one of the 20 Level 7s who made the national team that received a free entry to a camp in Tennessee. 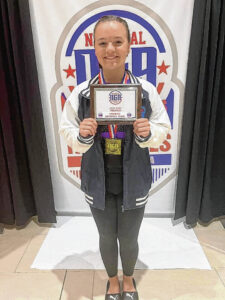 Victory Gymnastics Academy’s Chelsea Jones is all smiles after winning a national championship and making the national team.

“I started on bars, and bars did not go how I wanted it to go, and instead of letting it affect the rest of my competition, I just said, ‘You know what, We’re just here to have fun,’ so the last three events, I just went out and did my routines,” Jones said. “I just went out and tried to have fun.”

Jones placed fourth on the beam and eighth on the vault. Jones, who plans to take a gap year before possibly pursuing acrobatics and tumbling in college, also made the national team as one of the top 20 Level 9s that will attend the same camp in Tennessee.

“I’m really honored,” Jones said. “It was really exciting, and it’s really different than anything that I’ve done before. So I’m excited about it.”

Alanna-Mae Purnell was Victory’s other national champion. She won the Xcel Silver 7-8-year-old bars with a 9.7. 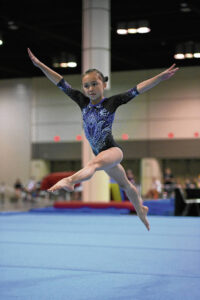 Purnell, who will be a third-grader at Richards Elementary, finished second in the all-around with a 37.575. She was third on the floor, fourth on the beam and sixth on the vault.

“It felt good,” Purnell said. “I stuck my dismount (on the bars). I thought it was cool. It was fun. It felt like a regular meet.”

Meghan Young also competed in the Xcel Silver division. She finished fourth on the floor, fifth on the bars and beam and sixth on the vault on her way to a fourth-place all-around finish with a 37.60. 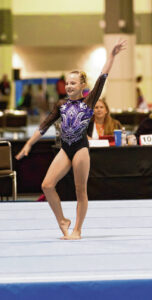 “I thought I did really good,” said Young, who will be a sixth-grader at Southside Elementary. “I would do it again. I liked travelling and meeting new people. It was really fun. It wasn’t really scary at all.”

Two other Level 7 gymnasts came away with third-place finishes on one event. Reina Kawamura, who will be an eighth-grader at Northside Middle School, took third on the vault, fifth on the floor and sixth on the bars en route to a ninth-place all-around finish with a 36.775.

“I think I did pretty good, but I feel like I could have improved on some things,” Kawamura said. “I thought it was really fun because I got to compete with gyms that I’ve never competed with.” 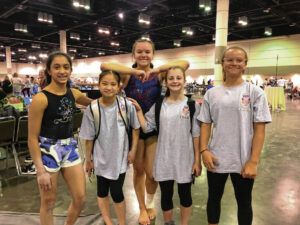 Hayden Harper, who will be a seventh-grader, finished third on the bars, fourth on the vault, ninth on the floor in placing ninth in the all-around with a 36.625.

“I thought I did really good,” Harper said. “I don’t think I’ve placed third on vault in awhile, so I was really happy about that.”

Victory had one Level 8 competitor. Adhvika Dhanya, who will be an eighth-grader at Northside, placed fourth on the vault, fifth on the floor and ninth in the all-around. 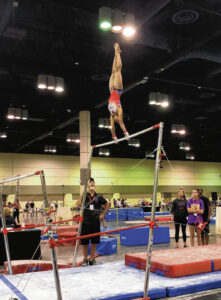 “I felt like I could have done better,” Dhanya said. “But overall on two events, I did really good.”

“It wasn’t the meet Adhvika was hoping for here at nationals, but she came home with hardware,” assistant coach Shanthi Teike added.