INDIANAPOLIS—Rep. Jim Lucas, R-Seymour, took to Facebook on Wednesday to ask questions about the Uvalde school shooting on May 24 and has since suggested it may have been a false flag operation.

Lucas’ post began with, “Was the Uvalde school shooting allowed to happen?” and questioned how the shooter afforded the weapons, why law enforcement waited to engage the shooter and why people were stopped from entering the building.

Lucas is calling for the federal government to have “an independent panel of people from all sides of the aisle.”

“Let it be an open investigation,” he said to The Statehouse File. 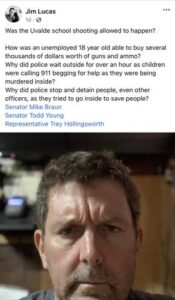 The shooting at a Robb Elementary School left 21 dead, including 19 students, and many have deemed the police’s response too slow. The gunman spent over an hour inside the school, yet the director of the state’s Department of Public Safety, Steve McCraw, said it should have been over in three minutes.

According to The New York Times, the Department of Justice is investigating and the school district’s police department chief, Pete Arredondo, is on administrative leave.

A possible explanation for what happened, according to Lucas, is “a false flag was allowed to happen to use that as an excuse to come after our gun rights.”

Lucas said it could have been orchestrated by the federal government and “a possibility that has to be considered, given the circumstances,” is that police were detaining people to prevent them from stopping the gunman.

“The gross level of incompetence by so many people gives a reason for reasonable suspicion to consider other alternatives, up to and including intentionally allowing this shooter to carry out his act,” said Lucas.

House Speaker Rep. Todd Huston, R-Fishers, was unable to be reached for comment.

The Indiana chapter of Moms Demand Action—a group that came out of the Sandy Hook shooting and is “for gun sense in America”—declined to comment, and so did House Minority Leader Rep. Phil GiaQuinta, D-Fort Wayne.

Jack Sells is a reporter for TheStatehouseFile.com, a news website powered by Franklin College journalism students.