The four-day event combined one night of distance events, one night of sprint events followed by two mid-distance events and two days of traditional invitational events in the unique 50-meter pool laid out in the middle of the Riviera’s recreational pool which is enjoyed by club members and their families during the competition.

For the sprint events, Freel placed first in three of the four Girls Open events, winning the 50 backstroke, 50 butterfly and 50 freestyle. Furnish took second in the 50 breaststroke. Other top-10 performances were turned in by Westphal, Johnson and Annie Murer in the sprint events.

Freel ended up as the top scorer for Club Olympia with 231.5 points, winning all seven of her events for a total of 11 victories. Westphal scored 202 points, finishing first in one event, second in four and third and fourth in her other two races. Johnson scored 172 points, and Furnish added 125.

Cole Ehara, competing in the Boys Open events, scored 84 points. Hundley scored 68 points and placed as high as third in the Boys Open 200 butterfly. Despite two DQs as a new swimmer in his first year on the team, Sarthak Deshmukh scored 67 points in his four other Boys 8U events, including a first in the 50 breaststroke. Adir Joshi scored 63 points in his eight Boys 10U races. Shourya Malviya scored 61 points in his six 10U events, including placing third in the 50 butterfly. Joshua Pendleton won all three of his Boys 11-12 races to score 60 points.

Donner Swim Club competed in meets the past two weekends, and one Donner swimmer swam in the Central Zone Open Water Championships.

The Donner girls team placed third overall with 558.5 points. Among the 27 Donner swimmers, Camila Murguia Mejia was the highest point contributor in 10U with 136 points, followed by Rebecca Murguia Mejia with 117 and Milie Fry with 92. In the 13-14 girls category Mridula Muthukumaran was the highest point winner for the club with 95 points. Ellie Proffitt led the scoreboard for the Open girls category with 26.5 points.

The boys scored 34 points, with Aarush Mahato leading with 29.

The previous weekend, Donner took a 26-member squad to the FRST Summer Classic at Franklin.In the girls-10 and under category, Alexis Miller, Camila Murguia Mejia, Shaivi Nighokar, Rebecca Murguia Mejia earned a spot in the Age Group state championship in the 200 freestyle relay.

In the 11-12 girls, Sanchita Ponnathpur swam to four top-10 finishes.

In the 13-14 girls, Cora Tregoning and Georgia Abdallah each had one top-1o finish. Muthukumaran had four top-10s.

In the Open boys category, Jude Abdallah swam to two top-10 finishes. Nicolas Bowers and Isaac Proffitt each had one top-10 swim. 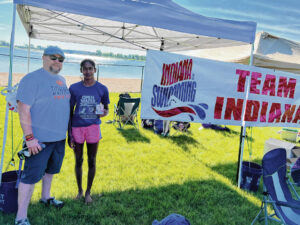 Meanwhile, that same weekend, Muthukumaran swam for Team Indiana in the Central Zone Open Water Championship at Pleasant Prairie, Wisconsin. She finished 51 st in the 13-14 age group in the 2.5K freestyle event to help Team Indiana to a second-place finish out of nine Zones represented. Mike Cunningham, who is taking over as the new Donner coach in August, came up from his current club in the Chicago area to cheer for Muthukumaran.