A late-season surge helped create a little bit of excitement heading into the offseason for the Columbus East boys basketball team.

The Olympians, after starting 2-13, won five of their last six regular-season games before giving eventual regional champion Bloomington North all it could handle for 3 1/2 quarters in the opening round of the sectional. East is hoping to carry that momentum through the summer and into next season.

“I think they realized they could play at a higher level,” East coach Brent Chitty said. “Even in the sectional, we played pretty well. You look at Bloomington North — they played a close game with Cathedral (in the semistate), and then Cathedral wins the state by 30 points. We have to make a habit of playing at that level every day in practice and let it transfer to the game.”

Chitty got a close look at next year’s team during the month of June, when coaches are permitted to work with their teams in practice and game settings. The Olympians played seven games, going 1-3 in a league at Hauser and 3-0 in a shootout at East Central.

“I look more at how we played (than wins and losses),” Chitty said. “We just kind of tried to find our way. I thought we started competing better, and open gym games have been very competitive. Then, we went down and played pretty well at East Central. We played at a much higher level than we’ve been playing at. We ended June on a pretty good note. We just have to get some people healthy and keep grinding away.” 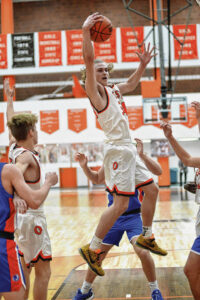 One of those players they’ll need to get healthy is incoming senior and returning starter Julius Dailey, who did not play in June because of a knee injury.

“We have some ankle injuries and bad knees,” Chitty said. “We just have some guys that have to get well. When you don’t have everybody, it’s tough to get a good feel. But our young guys have stepped up, and our seniors have done a good job of leading them.”

“We have some incoming freshmen that we think are pretty good,” Chitty said. “We’re excited about a lot of them. I’m really pleased with our young players, and then we’re getting some good senior leadership, as well. Pete Coriden is starting to play really well for us. Ben Sylva is starting to emerge as our leader, along with Zane Moravec. Most of them are playing AAU basketball through July, so they’ll get a bunch of ball in.”

Chitty is pleased with the progress he saw in his team throughout the month of June.

“From the beginning to right now, we’ve really made some improvement,” Chitty said. “From where we started to where we ended up, I like where we’re at. We learned a lot about ourselves, and hopefully, we can get better. We have some room to improve, and hopefully, we will.”