Going into his junior year, Jaxson Scruggs thought his future was as a wide receiver.

Then, after being switched to cornerback prior to that junior season and enjoying a stellar year as a shutdown corner, Scruggs figured that position would be his future.

But then last summer, before his senior season, Columbus North coaches moved Scruggs to safety to get him more involved with the action since opposing teams hadn’t thrown his way much when he played corner the year before.

Now, it appears the 6-foot-1, 196-pound Scruggs’ future at Indiana Wesleyan will be at safety.

“I think it was for the best really,” Scruggs said. “Looking at my size and the sizes of people in college, I’m about the right size, and it was best for our team. I feel like I improved a lot at the safety position after playing corner as a junior. I feel like I helped myself and the team. As the safety, you have to know the plays more so you can get the plays to the corner. You have to know the defense as much as a linebacker.” 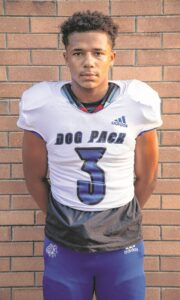 For one more game, however, Scruggs might get to play corner. He is listed as a cornerback on the South roster for Friday’s Indiana Football Coaches Association North-South All-Star Classic.

“I’m going to go in there with the mindset that I’m going to do the best I can,” Scruggs said. “I set a goal to win Defensive MVP, and if any quarterback throws my way, it will be getting picked off. Hopefully, they put me back there at kick return, so I can take one to the house.”

Scruggs ranked among the state leaders last fall with more than 800 yards in kickoff and punt returns. He also intercepted two passes and returned a blocked field goal for a touchdown in earning All-Conference Indiana and Class 6A Senior All-State honors.

The field goal return came on a kick that Scruggs himself blocked in a win against Bloomington South that propelled the Bull Dogs to their second consecutive Conference Indiana title.

“As a team, I feel like we really stepped up and gave coach (Tim Bless) one last ride, and I feel like we did really well winning back-to-back conference,” Scruggs said. “We ended on a good one.”

Bless resigned after last season, but not before teaching Scruggs and others some of the finer points of defensive football. When Scruggs was at Indiana Wesleyan for a practice earlier this summer, he was in a film session, and the IWU safeties coach asked the group if they knew what the phrase “Rock and Roll” meant in football terms. Scruggs knew it meant when the safeties switched off when the wide receivers go in motion.

“Coach B’s film sessions really helped me a lot,” Scruggs said. “The safeties coach asked us if we new what ‘Rock and Roll’ was, and I raised my hand. Everybody was quiet, and they asked me if I knew what it was, and I knew because coach B taught us everything we needed to know.”

“It went really well,” Scruggs said. “It wasn’t too hard. It was all about getting in the playbook. But I think I’ll fit right in. I just know if I put in the work and get in the playbook, I can. Especially on special teams, I feel like I can contribute to the team.”

When he hasn’t been at Indiana Wesleyan this summer, Scruggs has been doing block workouts set up by the Wildcats coaching staff. He and his brother D’Andre, who spent some time at Indiana State and now is back coaching receivers at North, have been working out at Blackwell Park and running the hill at Mill Race Park.

Jaxson reports to Indiana Wesleyan for practice on Aug. 8. He picked the Wildcats over offers from Valparaiso, Marian and St. Francis.

“Every time I went (to IWU), it was more like home,” Scruggs said. “I really like the facilities. They just started their program, so they’re young and growing, and I can grow with them. They’re also a Christian school, and that really stood out to me.”

The players for Friday’s North-South game reported to camp at University of Indianapolis earlier this week. The game is scheduled for a 7 p.m. Friday at Ben Davis High School.

Scruggs, who was the only local player picked for this year’s game, is the first Bull Dog to be selected since Trenton Kelley in 2019. Kelley was unable to play in that game, so Scruggs will be the first North player to participate since Coleman Tennyson in 2017.

“My very first thoughts were, I’m very blessed because not a lot of people get a chance to play in that game,” Scruggs said. “It means a lot to me. It just shows that if you put in the work, you can get to places like this and put my city on the map.”