The Columbus North incoming sophomore settled down and rallied to win that game to tie Columbus East’s Erik Takahashi at 5-5. The top-seeded Song then won the final two games to pick up a 7-5 victory and claim the title.

“I slowed down, and I calmed myself down, and I played more defensively so that I wouldn’t be making the errors,” Song said. “I managed to make it to 40-40, and then I was safe to attack more since it wasn’t (match) point, and I continued to play that way.” 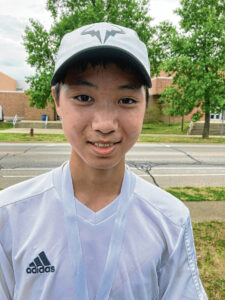 Song was one of six winners from Columbus out of the seven divisions in Friday’s event at North High School. Sydney Mehall of Indianapolis took the Girls 12-and Under title.

Lucy Bergman, who will be a freshman at Columbus North, became a two-time city champion. The winner of last year’s Girls 14-and-under title won the Girls 16-and-under championship this year.

“It was definitely a bit more challenge, but I looked forward to that, and I think it will help me in the upcoming high school season,” Bergman said. “Hopefully, I can play again and keep my title.” 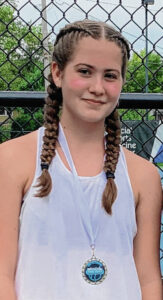 Following a 6-1 first-round win against Regan Ralston of Fortville, Bergman upset second-seeded Elise Hartung of Seymour 6-2 in the semifinals, then topped top-seeded Siri Poludasu of North 6-3 in the final.

“I have a lot of respect for both of them, but (not being seeded) definitely motivated me, and I wanted to prove myself,” Bergman said. “It might have helped. I’m really happy with how I played. I think keeping motivated throughout the match helped me win.”

The Boys 14-and-under age group was split into two divisions. Alek Devidze, who will be a sixth-grader at CSA-Lincoln won the “A” Division with a 6-3 victory against Jace Branham.

“I got upset a few times, but I came back on every match,” Devidze said. “Jace was a really competitive player, and it feels good to win.”

Advait Aras, who will be an eighth-grader at Northside Middle School, won the Boys 14-and-under “B” Division with a 6-3 triumph against Jaishal Padmanabhan

“I played safe most of the time,” Aras said. “Jaishal was a tough opponent. He put up a tough fight.”

The Girls 14-and-under, with only five players, and Boys 12-and-under division, with three players, were contested as round-robin events. 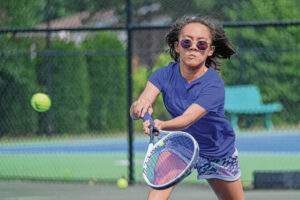 Isalea Juanita Tan, who will be seventh-grader at Central Middle School, won all four of her matches to take the Girls 14-and-under title. Tan battled back from a 3-0 deficit in her opening match to post a 5-3 win against Yunxi Isabella Pan of Columbus.

“I’m happy with the way I played,” Tan said. “I was able to catch up when I was losing. I was able to be consistent enough, even against the really good players.” 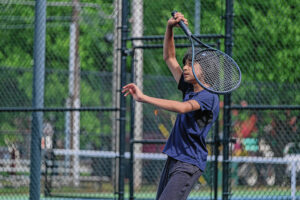 Ronit Mengale, who will be a seventh-grader at Central, won both of his matches to capture the Boys 12-and-under division.

“It was defintely tough because a lot of the players out there are definitely experienced,” Mengale said. “It was a challenge, and that was great.” 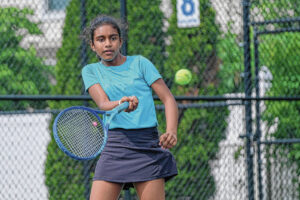 The City Junior Tournament, which featured only singles and no doubles, and the rest of the City Tournament are being contested on separate weekends this year. The rest of the city tourney will be July 29 through Aug. 1.