As a general rule, athletes tend to get progressively slower once they reach a certain age.

Somebody forgot to tell that to Lee Bridges.

The 55-year-old Columbus North graduate ran faster in winning a 400-meter gold medal at this year’s World Track and Field Championships than he did when he won in 2018. His 52.58-second clocking July 9 in Tampere, Finland, was good enough to claim the gold medal in the 55-59-year-old division.

The other thing Bridges was able to take advantage of were ideal weather conditions for his 400 final. 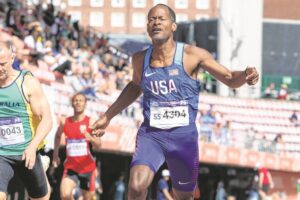 “I’m always surprised to be able to run decent times, in the 52-range,” Bridges said. “But the thing that came together in this meet is, the weather was perfect. It was 70 degrees, and it was sunny. They have qualifying rounds in the sprint events, and much of the meet previously, we were running in rain. It was a perfect day. In my mind, I’ve run long enough that there’s always conditions that you deal with, whether it’s windy or it’s hot or cold. It doesn’t happen very often that it’s perfect like this, so you have to take advantage of it.”

At University of Illinois, Bridges ran a personal-best of 45.63 to finish sixth in 1989 and earn All-American honors.

“I have no idea,” Bridges said. “I feel like I have more workouts these days that are average. You have good days, and you have days that you just kind of grind through it. You kind of have rose goggles on. I look back at my journal, and it’s pretty consistent. I have good days, and I have average days. As I’ve gotten older, it’s gotten a little tougher.” 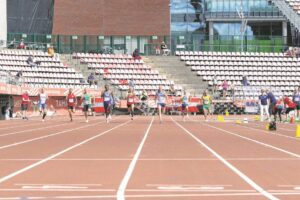 Columbus native Lee Bridges (in blue) enters the homestretch in the 400 meters July 9 at the World Track and Field Championships in Tampere, Finland.

Bridges lives in the Chicago suburb of Homewood, Illinois. He is semi-retired and has small financial planning practice.

While his schedule has become a little more flexible over the past couple years, his body has not.

“I’ve found that I can’t train as much,” Bridges said. “Last year, as we came off of COVID, they held the USTF Nationals in 2021, and we were all happy just to be there coming off of COVID. I stopped training because of COVID and the lack of meets. I started training again in March, and I found my body wasn’t progressing. Two or three days a week is as much as my body will allow me.”

Bridges had been training with a group of four people called “Team Explosion” on an indoor track at Homewood-Flossmoor High School. When COVID came, and the school shut down, they moved to the Gately indoor track, which is part of the Chicago Parks District.

“My goal for this age group is the world record,” Bridges said. “I’m pretty close to that, so I at least want to stay around to get that and 200 record. The 200 is always to me a bonus.”

Most of all though, Bridges is happy to still be competing.

“(Winning gold) was one of the best feelings I’ve had, especially given the nature of our experience over the last few years,” Bridges said. “It reminds you how delicate all of this is. To me, it’s a great experience, but COVID has shown us we have to appreciate things more.”