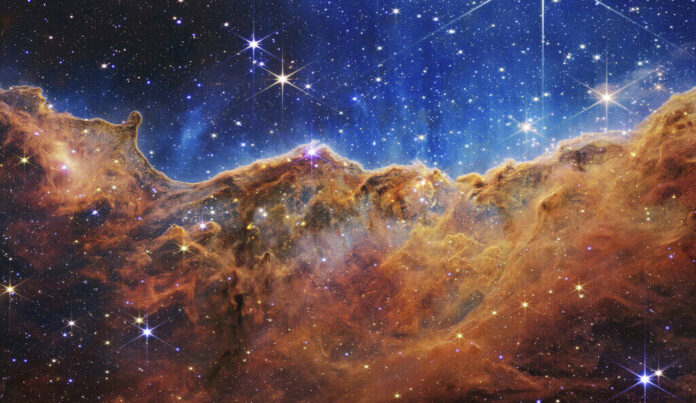 The first images from NASA’s James Webb telescope, released this month, offer wondrous glimpses into stars and planets billions of light years away: in what is truly a space opera, the telescope shows them being born and dying, and cosmic material being sucked into black holes.

The telescope is the most powerful space-based observatory ever built. It does not circle the Earth, like its predecessor, the Hubble space telescope, but is in orbit around the sun. Apart from offering stunningly beautiful images, it is a new milestone in the human understanding of the cosmos, a technological marvel that it is hoped will continue to beam down new insights for decades to come.

However, it is in the nature of deep space exploration that it is also a milestone in what is not yet known or understood. On the very simplest level, the human mind has been conditioned to assume that photographs are images of what exists, or at least did exist at the moment at which they were captured.

In this case, we are looking at scenarios – galaxies, nebulae – that may no longer have existed millions of years before a little planet called Earth began to form. One “deep field” image of the SMACS 0723 galaxy cluster, nearly five billion light years away, brought galaxies into focus as they were more than 13 billion years ago. “We see structures that we don’t even know what they are,” said the NASA astrophysicist Dr. Amber Straughn. In this, astronomy shares a common ground with that other frontier science, the study of the brain. For all the progress that brain scanning technologies have made over the last 70 years, the central mystery of consciousness remains as elusive as it has ever been. In his radical book “Being You,” the neuroscientist Professor Anil Seth proposes a bold new vision of what it may be, and how it may interact with – and even control – what we regard as reality.

The holy grail in astronomy is not consciousness but how the cosmos came into being, and in so doing created life itself. One of the images analyzed starlight as it passed through the atmosphere of a sweltering Jupiter-like planet a mere 1,150 light years away. Though the planet is too hot to contain liquid water, the images revealed the presence of water vapor, once more raising the possibility that life may indeed exist, or have existed, elsewhere. It’s a possibility that is tantalizingly thrown up by many space adventures, not least by a previous NASA pioneer, the Cassini spacecraft; its 13-year exploration of Saturn found oceans of liquid water, deep beneath the icy crusts of three of the planet’s moons.

However, while such discoveries reveal the existence of conditions capable of sustaining life, they have yet to report back any evidence of life itself. So the issue remains in the realm of philosophy, posing a binary in which each alternative is truly mind-boggling: either life exists elsewhere, raising whole new questions of what forms that life may take; or it doesn’t, leaving the astonishing mystery of how it ever could have happened once. The only reasonable response is awe.