Local real estate agents say the Bartholomew County housing market is shifting away in recent months from the “frenzy” and “bidding war”of the past couple years, with more caution from buyers as they react to rising interest rates and uncertainty over the economy.

Last year, agents described a sizzling-hot housing market in Bartholomew County, with the pandemic and historically low mortgage rates encouraging more people to look for homes, while many would-be sellers decided to stay put, driving down the number of houses on the market when demand was surging.

Now, the local house market has “definitely shifted,” with the pace at which homes sell slowing down somewhat, local Realtors said.

“Last year, the second that a house came on the market, or (buyers) saw it on Zillow, it was like a race to see who could get there the fastest,” said Laura McGurk, a Realtor at Century 21 Breeden in Columbus. “Oftentimes, it was like a running joke, ‘Oh, this house has been on the market for an hour, it has already sold.’ Now, it’s slowing down enough that you have time to get there. You don’t have to drop everything in your schedule and immediately run to a house.”

However, home values have continued to rise dramatically in Bartholomew County, going up faster than the national average, creating a tough market for many entry-level buyers, according to data from real estate company Redfin.

As of June, the median sale price of single-family homes in Bartholomew County was up 19.3% year over year, compared to a 10.9% increase nationwide.

“I’m not sure if it was the pandemic or just kind of the crowd mentality that made people buy in a frenzy, but definitely, the value of houses went up dramatically in Columbus over the last year or two,” McGurk said. “That $260,000 house that you would have bought a few months ago, it didn’t cost that much pre-pandemic.”

Currently, buyers who want a move-in ready home in Bartholomew County for under $200,000 are having trouble finding anything in that price range that is ready to be occupied, McGurk said, adding that it is a “difficult market.”

At the same time, buyers are now having to contend with higher interest rates, as the Federal Reserve agressively raises its benchmark interest rate in an effort to tame inflation, The Associated Press reported.

The central bank’s decision follows a jump in inflation to 9.1%, the fastest annual rate in 41 years, and reflects its strenuous efforts to slow price gains across the economy, according to wire reports. By raising borrowing rates, the Fed makes it costlier to take out a mortgage or an auto or business loan. Consumers and businesses then presumably borrow and spend less, cooling the economy and slowing inflation.

“The big thing is that the market we’ve been living in for the last several years has been kind of accelerated by the interest rate being so favorable,” said Will Wagner, broker-owner of Dean Wagner Realtors in Columbus. “And I think that the fact that the interest rate is going up, it’s going to lead to some other changes in the market as far as buyers’ expectations and behaviors. It’s just going to be another little shift we’ll have to navigate.”

Over most of the past past decade, the average mortgage rate on a 30-year fixed-rate mortgage mostly stayed below 4.5%, according to the AP, which cited data from the Federal Reserve Bank of St. Louis. This past Thursday, mortgage buyer Freddie Mac reported that the average 30-year rate was 5.3%, down from 5.54% but up from 2.8% a year ago.

The financial data firm Black Knight estimates that the rise in mortgage rates has increased a typical borrower’s monthly payment by 44% since the beginning of the year. Since the start of the pandemic, the average mortgage payment has doubled to more than $2,100.

In addition, the number of Americans applying for a mortgage is down significantly from a year ago, according to wire reports. As of last week, weekly mortgage applications tracked by the Mortgage Bankers Association were down roughly 50% from a year earlier.

The decline in mortgage applications could signal a slowdown in future homebuying activity, since potential homebuyers do not apply for a mortgage unless they have settled on a particular home or condo, according to wire reports.

But for right now, homes in Bartholomew County are still selling, just not as quickly as they used to in some cases.

“You’re having a different experience when you do sell,” Wagner said. “Over the past two or three years, we got used to basically putting your house on the market (and) getting to pick which one of the five or six offers they got in the first three days. …Whereas now, you have to be careful where you price it a little bit more.” 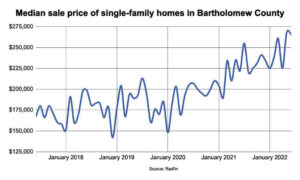 By Andy East | The Republic