The Tulsa Drillers were changing out of their uniforms following Sunday’s 16-3 win against Arkansas when Drillers manager Scott Hennessey came into the locker room and made an announcement.

Hennessey told the team that Devin Mann was being promoted to Triple-A Oklahoma City.

“We kind of had an idea that it was a possibility,” Mann said. “I didn’t know for sure. Then after the game Sunday, I found from my manager in Tulsa. We were actually in the locker room. Everyone was taking off their gear and stuff. He just came into the locker room and announced it in front of the team.”

The promotion put a cherry on top of a big month of July for the 2015 Columbus North graduate. Mann batted .309 with three home runs and 11 RBIs in July for the Los Angeles Dodgers’ Double-A affiliate.

“I felt really good with how I was playing,” Mann said. “It’s been a good season, and I’ve been swinging it pretty well. I’ve been excited for how I’ve been doing and excited for the opportunity to keep playing well in Triple-A.” 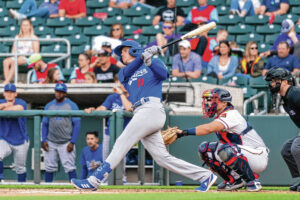 Columbus North graduate Devin Mann connects with a pitch for the Tulsa Drillers May 7 at Riverfront Stadium in Wichita, Kan.

“I had a two-week stretch recently, where I was struggling,” Mann said. “But I think for the most part, my body of work as a whole this season has been pretty solid, and I’ve been pretty pleased with it so far. I think I’ve made some good strides last year and this year. I’ve been playing pretty well this year, so I definitely think it’s a step in the right direction.” 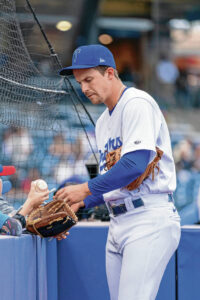 Hennessey was happy for Mann.

“He didn’t get to play a lot early this year because Michael Busch was here, but he never pouted, never hung his head and he kept getting better,” Hennessey told the Tulsa World. “He earned the right to go up, and he’s going to get his chance. It’s a really neat feeling to see where he started and where he is now. He worked his tail off. Great for Devin.”

Tuesday night, Mann made his Triple-A debut for the Oklahoma City Dodgers at Salt Lake City. After playing second base at Tulsa, he came into the game in left field in the seventh inning Tuesday and grounded out to third in his only at-bat. 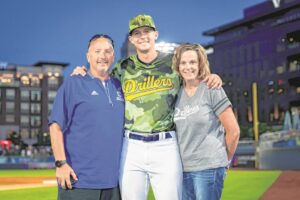 Columbus North gradaute Devin Mann poses for a photo with his parents Bill and Diana Mann after a Tulsa Drillers game May 27 at ONEOK Field in Tulsa, Okla.

Mann played left field and shortstop during his high school career at North and mostly second base in his three years at University of Louisville. He has played those positions, as well as third base, during his minor league career.

“I’ll kind of be all over the place just because of the way their roster is shaking out,” Mann said. “(The versatility) doesn’t hurt. I enjoy it just to get my bat in the lineup whenever I can.”

After spending the 2018 and 2019 seasons in Rookie League and Class A baseball and playing a limited 2020 season during the COVID pandemic, Mann began last season at Double-A Tulsa in the Texas League. He had been there until moving up to Oklahoma City in the Pacific Coast League this week.

“It was nice,” Mann said. “That was my first (in-season) promotion in pro ball, so it was really cool. I felt like I earned that. I’m excited just to be up in Triple-A and be back with a lot of the guys that I’ve been with throughout my minor league career and just continue the season up here.”