As Columbus East has become one of the state’s top volleyball teams the past several years, the Olympians always have had incredible depth.

That won’t be the case this fall, when East will look to a core group of eight players to rotate through the six positions on the court. But that doesn’t mean the Olympians are expecting any kind of a dropoff.

The Olympians do return a big-time recruit in 6-foot-4 senior middle hitter Gabby Dean. The Illinois commit led East with 314 kills and 96 blocks last season in earning The Republic Volleyball Player of the Year honors.

“It’s real nice to have a 6-4 middle hitter going to the Big Ten,” McIntosh said. “Gabby is great. She’s a huge presence. Her skills are great. We’re looking for her to be a little bit more of a leader this year. The girls look up to her.” 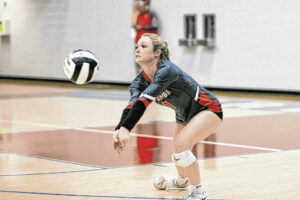 The back row will be experienced with senior Kenzie Foster (149 digs, 21 aces) and junior Chloe Gilley (166 digs, 44 aces). Those two are battling for the libero spot, and whichever one doesn’t win that will be a defensive specialist.

“They’ll do great for us back there,” McIntosh said. “We should be fine there.”

Where the Olympians have a question mark is at the setter position. Senior Erin Williams, who was the JV setter last season, and junior Caroline Frost are battling for that spot.

Frost (100 kills, 32 blocks) and senior Maddie Cline (34 kills, 12 blocks) are the top returning outside hitters. Juniors Jenna Guse, who could play middle or outside hitter, and Savanna Sullivan are up from the JV.

“I think the ones that are here are competitors,” McIntosh said. “They’re hungry. They’re willing to put in the work and put in the time. I think they’re ready to step up. They’re going to be ready for it.”

East looked to be loaded for another big season, but recently lost a pair of 6-foot, two-year starting hitters. Saige Stahl committed last week to play basketball at Indiana State and has decided to focus on that sport, and Libby Dippold has returned to her hometown school of Seymour.

“I’m hoping that we can get these girls in here and develop them, and they get used to us as coaches and what we expect from them,” McIntosh said. “The future is bright because we have that depth in those younger age groups.”

McIntosh is pleased with what she saw in tryouts Monday, Tuesday and Wednesday.

“We’re looking pretty good,” McIntosh said. “We have a close bunch. They’ve been having some fun. They’re driven. They’re hungry. I definitely think we can make a run.”

The Olympians made a run to the regional final last season. They went 28-5, including 6-0 in repeating as Hoosier Hills Conference champions.