After a slow start last volleyball season, Columbus North began to put things together late in the year.

Second-year coach Jenna Grider-Ortega and the Bull Dogs are hoping that momentum will carry over into this season, when they will look to improve on last year’s 9-22 record.

“I think this year is going to be a lot better,” Ortega said. “I’m very excited with this group of girls and what they have to bring to the court. My biggest goal is just to have that winning season, finally turn North’s program around and get them to where I know where we can be. They deserve the recoginition and more wins. I think we have put the work in and deserve it.”

The Bull Dogs are coming off a solid performance in the Jennings County Summer League.

“This summer, we’ve had great workouts, a great team camp,” Ortega said. “Summer league was a great experience, getting to see all the girls playing different positions and who played best with who. We mixed it up a lot. We never had a complete team. We moved girls around all over. We competed well.” 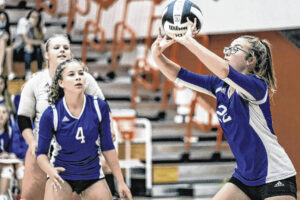 Senior Grace Barkes, who can play the middle or right side, and junior outside hitter Katelynn Mabis also saw significant action last year. Senior defensive specialist Rylie Boezeman is back after sitting out last season.

“The whole group, this senior class is welcoming,” Ortega said. “You would never know when you walk in the gym who is an upperclassman and who isn’t. These girls mesh so well together. It’s bittersweet because this is a group I don’t want to let go.”

Ortega is leaning toward running a 6-2 offense with Burns and sophomore Reese Edwards as the setters.

Juniors Kaitlin White in the middle and Roselynn Venegas at defensive specialist are up from the junior varsity. Freshmen Karen Dutro, who can play the middle or outside, and Elaina Penrod in the middle will look to make an immediate impact.

“The incoming freshman class has a lot of talent,” Ortega said. “We have some younger players coming in that have a lot of talent, and I think that’s going to really build the program. The group is still young, so I’m hopeful and excited for what the future is going to bring.”

Sophomore Kennedy Horn, the tallest Bull Dog at 6-foot-2, played some varsity last season, but currently is recovering from an ankle injury and likely will begin the season on JV.

“There is more height this year, but our defense is solid and scrappy,” Ortega said. “I think we have gained more confidence than what we had last year, and I think the support of all the girls around is helping with each and overy one of their confidence the way we mesh and come and come together more as a team. I think that will really play a big factor.”

With 29 girls out this fall, North will have a JV team and a C-team instead of a freshman team.

The goal for the varsity is to make a little more noise in the sectional.

“Obviously, beating (Columbus) East is something we haven’t done in a long time, and this year I think will be the year that will be a really good game,” Grider said. “I’m excited to see how that game goes. The girls are all friends, the coaching staffs have a pretty good relationship. It’s just a fun pretty competitive game that I feel like brings the community together, and my goal is to prove that Columbus North is bringing the talent back, and we are starting to show up.”