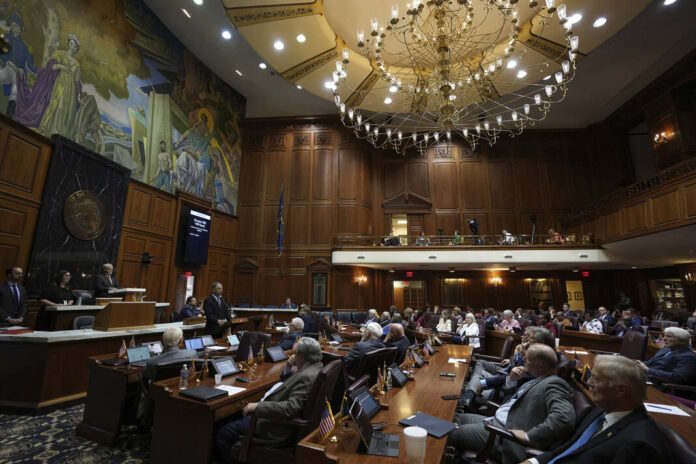 INDIANAPOLIS (AP) — Indiana Senators affirmed a House-approved relief bill on Friday that will provide $200 rebate payments from the state’s surging budget surplus if approved by the governor.

Though below Republican Gov. Eric Holcomb’s initially proposed $225 refunds, the measure that passed 37-9 represents a concession from GOP senators who were initially wary that the rebates would further fuel inflation.

Sen. Travis Holdman, who sponsored the bill, said the funding was to ensure “pregnant women and children are taken care of as best we can” in the wake of an abortion ban that the House approved Friday afternoon. Senators could also vote on that ban and send it to the governor later Friday.

The Indiana House also passed a final version of the relief bill on Friday, after which it went to Senators for a concurrence vote.

“I think we have a good bill going forward to the Senate,” Republican Rep. Tim Brown, who sponsored the bill, said Friday. Brown said Thursday the package was an agreement with Senate negotiators.

That compromise includes utilizing about $1 billion from the state’s record $6.1 billion in cash reserves for the rebates. Another approximately $1 billion will flow toward a state teacher pension fund’s future obligations, a debt Senate Republican leaders have prioritized paying.

Though several Senate Democrats voted in favor of the Senate bill, they said they were discontent with its outcome.

“They got the short end of the stick, and it’s their money,” Democratic Leader Greg Taylor said of Indiana taxpayers. He voted against the bill.

Democrats in the House had similar concerns, arguing that the pension debt included in the bill was manageable and that the $1 billion could go toward more pressing needs such as education, improving public health and supporting child care programs.

“I’m going to vote yes because a little bit is better than nothing,” Rep. Gregory Porter said earlier Friday. “We love this state like you love the state. But when it comes to what we have to say, it falls on deaf ears.”

Indiana senators on July 29 first approved a $45 million spending bill without rebates for state agencies that “support the health of pregnant women, postpartum mothers, and infants,” especially among low-income families. The services would be available for families with children under 4 years old and for those who adopt.

Arleigh Rodgers is a corps member for the Associated Press/Report for America Statehouse News Initiative. Report for America is a nonprofit national service program that places journalists in local newsrooms to report on undercovered issues. Follow her on Twitter at https://twitter.com/arleighrodgers