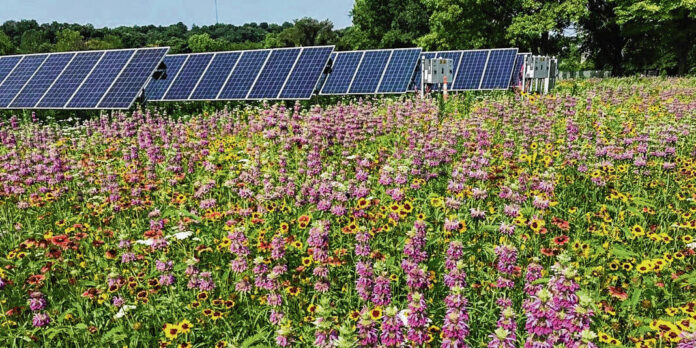 The Bartholomew County Plan Commission will again take up amendments to a proposal regarding solar field regulations in a hearing Wednesday morning.

It is unknown if the commission will vote on the proposal during the 8:30 a.m. public hearing in the first floor Cal Brand Meeting Room at Columbus City Hall.

Bartholomew County Senior Planner Emilie Pinkston says that will depend on whether individual members feel they have adequate information to make an informed decision regarding what planners call a Commercial Solar Energy System (CSES).

During the July 13 meeting that attracted more than 80 spectators, approximately 16 individuals spoke in favor of the proposed regulations regarding solar fields on agricultural land – about twice as many who spoke against it.

But even the supporters had concerns. For example, four advocates said the proposed setbacks would disqualify most sites for a solar field.

However, the most frequent reason given by farmers who support solar fields on agricultural property is individual property rights.

Most who spoke against the proposals insist they support renewable energy, but don’t believe a commercial solar fields should be allowed on agricultural land. They listed a variety of individual concerns including environmental concerns, financial liability for decommissioning solar fields and a potential negative impact on neighboring property values.

About a dozen individuals wrote to the commission prior to the meeting to express their views. While their correspondence was acknowledged, it was not read during the three-and-a-half hour meeting.

The plan commission’s involvement is just one of a number of steps the proposed regulations must go through.

If the commission votes for approval, it will be a recommendation to the Bartholomew County commissioners, who may adopt the proposals as presented, make revisions or reject the proposals.

The three county commissioners first became concerned when House Bill 1381 was introduced in the Indiana General Assembly early last year. If approved, the legislation would set state zoning and regulatory standards for commercial wind and solar installations, as well as for the siting of renewable energy sources.

Bartholomew County, along with nearly two-thirds of Indiana’s 92 counties, opposed the bill along with the Association of Indiana Counties and the Indiana Association of County Commissioners. HB 1381 would later die in the Senate due to the intensity of the push-back.

But the measure did prompt the three Bartholomew County commissioners to express their support of local control of land use decisions before they asked Bergman and his staff to research potential regulations.

But even if the proposals are approved by both the plan commission and the county commissioners, every request to construct a commercial solar field in an unincorporated area will require a public hearing before the Bartholomew County Board of Zoning Appeals before a conditional use variance is considered.

During July’s meeting, Columbus/Bartholomew Planning Director Jeff Bergman stressed the plan commission is not interested in hearing about any particular location for a solar field. The commission is only looking for new factual information from the public regarding the proposed regulations.

Bergman also advised the audience that solar fields can currently be put up in Bartholomew County with the approval of the zoning appeals board.

On Wednesday, each speaker will again be given a maximum five minutes to address the commission. A staff member will use different colored sheets to let the speaker know when they are about to exceed their time limit.

Pinkston suggested that each speaker be prepared to provide specific factual information to justify their position on the issue. Plan Commission president Tom Finke has also asked that concerns expressed in July not be continuously repeated on Wednesday.