An agreement has been approved for the Bartholomew County Highway Department to replenish its dwindling supply of road signs. The $12,577 contract with Stello Products, Inc. of Spencer, Indiana calls for replacement of many stop signs or curve warnings.

The agreement also calls for acquiring new 30-inch-by 36-inch signs with a series of different weight limits that will be posted at 13 rural bridges.

If a rural bridge on a county road has sustained a certain degree of deterioration, a single weight limit for all vehicles is usually posted.

While these types of limits have been around since 1913, it wasn’t until 1975 that the Federal-Aid Highway Act came up with a bridge formula as law that limits gross weight (vehicle and cargo combined) to 80,000 lbs, the Federal Highway Administration website states.

Today’s weight limit formula takes into account that short, heavy trucks can put more of a structural strain on a bridge than a long truck that distributes its weight across a long distance.

So now, a variety of specific weight limits for different types of trucks are being determined for some bridges. The new formula incorporates such things as the overall gross weight of a vehicle, the distance in feet between the vehicle’s outer axles, and the number of axles.

Bartholomew County Highway engineer Danny Hollander said these new signs are being posted mostly for the benefit of emergency vehicles. However, the limits pertain to a variety of trucks used in both the public and private sectors.

Federally-enacted bridge weight restrictions are intended to protect the structural integrity of America’s bridges, as well as protect the safety of drivers and passengers.

The only concern expressed by Hollander is that the new signs contain so much information that a driver may not slow down enough to read all the posted limits.

Single axle trucks refer mostly to what most people call city delivery trucks. It can also mean the detached tractor unit of a semi truck or a truck specifically made for towing.

Tandem trucks refer to a wide range of three-axle vehicles, with one axle in the front and two in the rear. Many have two wheels on each end of each axle. The most well-known tandem vehicles include dump trucks, fire trucks and large vehicles equipped with cranes, as well as fuel or water trucks.

When the weight limit refers to “gross,” that means the combined weight of the trucks and cargo.

Most weight limit signs are posted on the bridge itself. But the Federal Highway Administration suggests posting these new signs at the last interchange before the bridge, so truck drivers will be able to change their route if necessary. 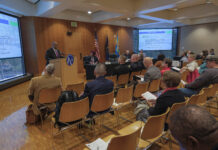 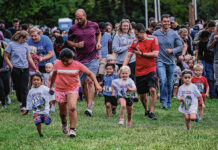