Columbus North has established itself as one of the state’s elite boys tennis programs over the past few years.

The Bull Dogs have been to the state tournament each of the past four years, twice making it to the semifinals. They were ranked No. 2 most of last season and fell to eventual state champion Carmel in the state semis to finish off an 18-2 season.

North once again looks to be among the state’s top programs. Here is a look at the Bull Dogs, along with the other area boys tennis teams heading into the 2022 season:

The Bull Dogs lost three of their seven varsity regulars and will field a young team.

“We’re looking pretty good,” Hammel said. “We’re going to be a good, solid team. We’re not going to be as solid as we were last year, but we have some very strong depth.”

Sophomore Hank Lin, who played No. 2 singles last season, moves up to No. 1 singles.

“He will do very well,” Hammel said. “He will handle his own at that position for the most part. He still has things to work on and improve on, but he’s played very well in the offseason, playing tournament. He will do some good things.”

Sophomore Parth Shah moves from No. 2 doubles to No. 2 singles. Sophomore Austin Clark steps in at No. 3 singles.

Junior Anvay Atram and Amrit Kar, who played together at No. 1 doubles as freshmen, are reunited after Atram played No. 3 singles and Kar played No. 1 doubles last season. Senior Parth Gupta will be at No. 2 doubles with either senior Darren Li or sophomore Yoki Murabayashi.

“I feel like we’re going to be very strong and very competitive statewide against anybody we’re against,” Hammel said. “We’re solid at 1 singles, 2 singles and 1 doubles. We’re still trying to progress at 3 singles and 2 doubles.”

The Olympians figure to be better this year after going 3-10 last season.

“I think we’ll probably be a little improved from last year,” East coach Matt Malinsky said. “I would classify us as having a pretty high floor, compared to past years. It will be a fun season. It will be challenging for sure, but the guys are working hard. These guys are a good group.”

Junior Eric Tahahashi, who played varsity as a freshman before missing last season with an injury, will take over at No. 1 singles.

“He’s a strong player, but he’s going to have his hands full with whoever the player from the other team is every time,” Malinsky said. 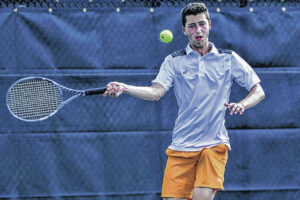 Senior Matthew Degner and junior Brady Redelman return at No. 2 and No. 3 singles.

“Last year, they were still relatively inexperienced,” Malinsky said. “This year, they will be battling again to see who separates themselves for those varsity spots. We have a lot of work to do to figure out who has the chemistry together. We don’t have a superstar that is going to blow everybody away, but we have a lot of guys who can fill in.”

The Jets have a new coach in Andy Kilps. He takes over for Heather Miller, who guided the team the past two seasons, going 8-7 last year.

“As a new coach this year, I’m having a lot of fun, and I’m learning a lot and having fun each and every day,” Kilps said. “My assistant coach Molly Crabtree is a great asset. It’s great to have her alongside.”

Junior Caleb Wallace, who played No. 1 singles as a freshman and No. 2 singles last year, will be back at No. 1 singles. Sophomores Jackson Burcham and JJ Dickey are battling for the No. 2 and No. 3 singles spots.

Senior Levi Gollmer returns at No. 1 doubles, where he will team with sophomore Hunter Pappano. A few others are vying for the No. 2 doubles positions.

The Panthers are coming off a Jennings County Sectional championship and will look for a repeat after going 11-14 last season.

Senior Owen Law returns at No. 1 singles, and freshman Parker Bales steps in at No. 2 singles. Senior Alex Leach, who played was No. 2 doubles and No. 3 singles, will be at No. 3 singles.

Senior Justin Ramey returns at No. 1 doubles and will team with junior Ryan Schuck, who played a variety of positions last season. Freshman Ty Zohrlaut will be at No. 2 singles, with junior Isaac Lightner or Janne Sebastian, an exchange student from Germany.

“I think Owen and Parker will be solid at 1 and 2,” Jennings coach Deron Brown said. “We lost 14 matches last year, and nine of them were by 3-2 scores. If we can get doubles playing like they’re capable of, we can be better than we were last year.”

Pete Khensouri returns for his 24th season as Lancers coach following an 8-8 season.

Senior Max Blandford returns at No. 1 singles. Junior Austin Brockman moves up from from No. 3 to No. 2 singles, and sophomore Milas Burkman moves from No. 2 doubles to No. 3 singles.

Senior Braedyn Johnson, who played at Edinburgh as a sophomore before spending last year at Southwestern (Shelby), will be at No. 1 doubles with freshman Bailey Totten. Freshmen Teddy Crawhorn and Braylan Lankner take over at No. 2 doubles

“We’re a young team,” Khensouri said. “Our kids are not like the Columbus North’s and Columbus East’s that play year-round. Our kids are seasonal. Those three singles are experienced. Hopefully, these freshmen come up big for us.”

With only five players, the Eagles are hoping for a couple more to be able to fill out the lineup.

Jack Sichting, who played No. 3 singles during last year’s 3-17 campaign, could move to No. 1 singles. Juniors Jon Kirchoffer and Sawyer Gore and sophomores Owen East and Trevor Shields will compete for the other two singles spots, with two of them ending up at No. 1 doubles.

“A positive note is, we do not have a senior, so this year will be a chance to gain valuable playing experience,” Brown County coach Kevin Roush said. “I know that the hallmark of the Brown County tennis program is to play hard and compete, and I feel that this group will do the same.”

The Cougars return four varsity players from a 9-8 team and have added three freshmen.

Junior Solomon Hall, who played No. 2 singles, is battling for the No. 1 singles spot with freshman Jonathan Neawedde. Senior Nathan Voelker played No. 1 doubles and No. 3 singles.

“It was a very good first two weeks of practice,” Trinity coach Kable Walton said. “We had good challenge matches. We’re incredibly positive. We have a lot of talented freshmen incoming with decent middle school experience.”

Friday;North Then There Were 4 Invite;6 p.m. 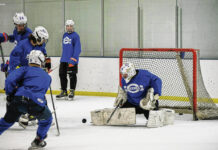 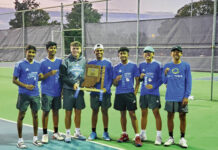 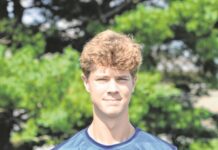